The poetics and politics of protest signs

The other day, I was talking to my friend, the literary scholar Emily VanDette, who had attended the Women's March in D.C. The demonstration in D.C., along with its sister marches taking place on every continent, combined to represent the largest effort of its kind in history. Emily and I conversed about the importance of those tremendous gatherings, and in addition to other topics, we couldn't stop talking about the signs.

While provoking anger, fear, and heartache, the rise of Donald Trump to the highest office has also prompted incredible amounts of creativity. That creativity was on display in the photographs from the many marches. Protestors organized, chanted, sang, marched, made strategic fashion statements, and they took the time to compose thoughtful, clever, militant, amusing, introspective, and rebellious messages to showcase on signs.


Everyone has been talking, rightly, of the civility on display in the marches all over. But let's also note the wit! pic.twitter.com/fPYhxeFdfh
— Amitava Kumar (@amitavakumar) January 22, 2017

Kumar is absolutely right. In observing the marches, we'd do well, among other things, to "note the wit!" As someone who spends way too much time reading and blogging about poetry, the art of writers conveying messages in condensed, creative phrasings appeals to me. Folks who study poetry as well as those who write it, could learn a lot from the signs of protest marches. After all,


so much depends
upon

among thousands of
others

At this point, I've looked at a couple of hundred signs from the marches, and have begun the process of collecting some. The plan is to think about them some more and figure out why some made me laugh out loud, others prompted me to sharpen my focus, others still led me to read and re-read in order to get it. After and during that time, I hope to share some of what I'm learning with my students, and see what they think as well. 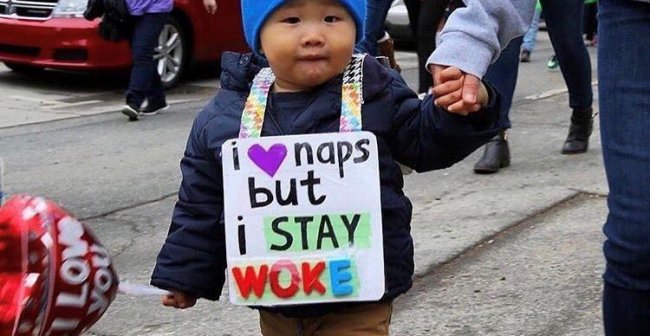 So far, one of the most memorable signs I came across was taken at the march in L.A. A baby of Asian descent rocks a sign noting, "I love naps but I stay woke." The sign is a convergence of discourses: For one, the notion of babies taking naps juxtaposed with the black-related conscious mandate of "staying woke;" second, the styling of the message (the heart image for love, the capitalization and coloring of "STAY WOKE," and the Lego-style lettering for "WOKE"); third, the premise that a child this age would speak this statement; and fourth, the premise that a child, a non-white and non-black child at this age is engaged in protest.

On the other side of children were senior citizens with signs. Some of their signs voiced their dismay that they were, after all these years, still needing to confront someone like Trump. Their signs, like the ones on children, showed how people linked their very identities to the messages they were conveying.

Of course, the largest grouping of signs I've seen so far were critiques of Trump's deeply troubling statements about women. The signs forcefully responded to Trump's assertion that when it came to a woman he desired, he would "grab her by the pussy." Countless signs announced resisting his touch. Some protestors carried reproductions of German artist Lennart Gäbel's illustration of Trump grabbing the Statue of Liberty. Many women carried signs asserting the power of "a nasty woman," a reference to one of Trump's insults of Hillary Clinton.

A Chicago protestor produced a hand-stitched sign that read: “I’m so angry I stitched this just so I could stab something 3,000 times.” The sign also shows a power fist holding a needle. Another sign noted that “without immigration Trump would have no wives.” Still other signs merged statements about "resistance" and "rebels" with images of Princess Leia from Star Wars.

As those messages revealed, the use of allusions was one of the most notable and pervasive poetic devices employed by composers of the protest signs. Their messages reflected that they were defiantly talking back to remarks made by Trump and projecting their responses publicly on the canvases of their signs. Some of the messages were direct, some were subtle, and many were layered.

My friend Emily texted me an image of her at the D.C. march holding someone's sign, which noted that "revenge is a bitch," a slogan that showed women re-purposing a term, much like "nasty," that had initially been used against them. But for those of us who know that Emily's last name is VanDette the term "revenge" carried added weight. A sign about a woman organizing a payback resonates in a special way when her very name invokes vendetta.

So that's where I am now, reading, re-reading, studying, and taking note of the wit, poetics, and politics of protest signs.

Related:
• Smarter Than You Think -- from book title to political statement
Posted by H. Rambsy at 9:51 AM