Of Poetry and Protest and its aesthetic force 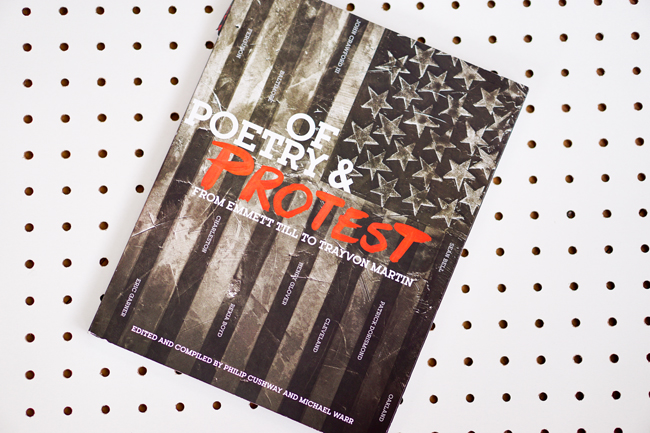 [Related: Photographs of Black Poets Matter: Victoria Smith and Of Poetry and Protest]

The aesthetic force of this book will capture viewers, not only poetry readers, in a multitude of ways.  For one, the framing -- the poetic contributions as responses or "protests" against police brutality -- places the book in conversation with the ongoing political concerns of the day. At the same time, the fact that several of the poems are reprints from previous works confirms that the practices of addressing violence against black people have been longstanding efforts among African American poets.


In his introduction, Michael Warr explains that:

Of Poetry and Protest: From Emmett Till to Trayvon Martin is unapologetically political. It sees, hears, and absorbs the political in its myriad voices, tones, comprehensions, forms, experiences, performative-interpretations, and experimentations, no matter how far beneath or above the scrutinizing radar, recognizing that beauty can be found in the whisper, the scream, or silence.


With this book, notes Warr, "we hope to expose and project poetic consciousness on the issue of police killing more broadly in the Public Square." Accordingly, "this book had to be expansive in size and design as well as content."

The many poems addressing brutalized black bodies collectively fulfill some of Warr's expectations. In her poem "Emmett Till," the late Wanda Coleman mentions "the youth's body," which was "weighted down in barbed wire & steel / dumped in the river."  In her poem "We are Not Responsible," Harryette Mullen represents the formal, cold responses of a non-sympathetic of governmental agencies: "We are not responsible for your lost or stolen relatives. We cannot guarantee your safety if you disobey our instructions." And later, "Step aside, please, while our officer inspects your bad attitude. You have no rights that we are bound to respect."

This assemblage of inter-generational African American poets also carries a kind of aesthetic force. We have Eugene B. Redmond (b. 1937) and Haki R. Madhubuti (b. 1942) together with Marilyn Nelson (b. 1946) and Angela Jackson (b. 1951) with Natasha Trethewey (b. 1966) and Major Jackson (b. 1968), and dozens of others. Of Poetry and Protest advances a nearly 100 years effort to get diverse ranges of black poets together on the same pages of a common book.

The design of the book, with juxtapositions of poems and artwork, photographs and prose prompt audiences to shift from linguistic reader to artistic viewer. In this regard, the book corresponds to art and photograph books, well beyond only the realm of conventional poetry anthologies. The editors for Of Poetry and Protest worked in several instances to accent the exchange between photographs and poetry. For instance, on one page we see and image of Mamie Till-Mobley crying at the casket of her son, and on the adjoining page we encounter Corneilus Eady's poem "Emmett Till's Glass-Top Casket," a persona poem written from the first-person perspective of the casket.

The black and white photographs by Victoria Smith of the 43 contributing poets enhances, if not defines, the importance of this book. Throughout Of Poetry and Protest, we come face-to-face with arresting images of the contributing poets. Look at Tyehimba Jess and the Wanda Coleman and Marilyn Nelson and everyone else. The poems and books they've written clarify their identities as poets, and Smith's photographs highlight that they are also notable visual subjects.

Related:
• Amiri Baraka's presence in Of Poetry and Protest