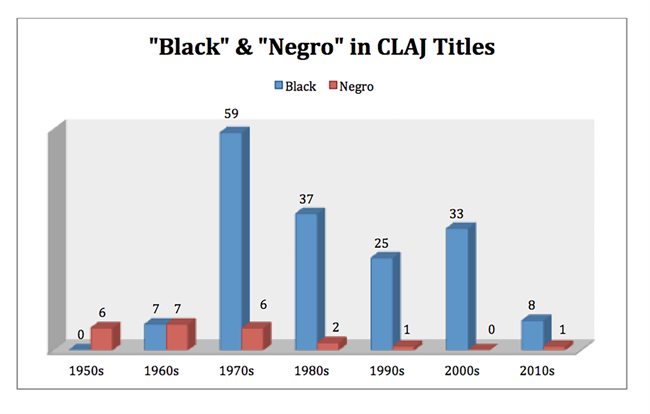 An examination of recurring words in articles titles in CLA Journal published from 1957- 2012, reveal a number of shifts. For now, we concentrated on the uses of “negro,” “black,” “Afro-American,” “African-American” and other related terms over the decades. The shifts reflect changes in terminology among scholars in the field, and also in the variety of concerns among those who published in the periodical.

The word “black” is not used in article titles during the 1950s, and appears 7 times during the 1960s. During that time period, “negro” was used 13 times.

In 1969, Charles H. Curl’s article “Black Studies: Form and Content” was the first article to use the phrase “black studies” in the title. The appearance of “Black Studies” in an article’s title in the late 1960s coincides with the rise of Black Studies programs across the country. The phrase “Black Studies” appeared titles of articles on only 5 more occasions, and those 5 articles were published between 1970 and 1973. 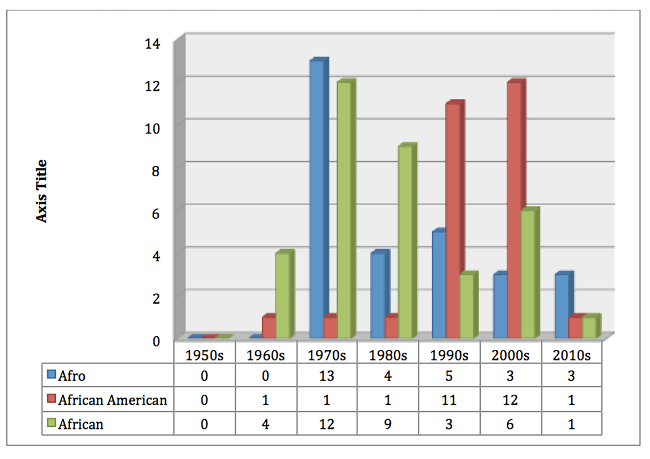 The term “Afro,” which is used a total of 28 times in article titles, appears in conjunction with various other terms. For instance, contributors have concentrated on “Afro-French writers,” “Afro-American poetry,” “Afro-Dominican Poetry,” “Afro-American Fiction,” “the Contemporary Afro-American Novel,” “Afro­Brazilian History,” and “AfroCaribbean Routes.”

The varied usage of “Negro,” “Black,” “Afro,” “African,” and “African American” among dozens of contributors in article titles offer a glimpse at the shifting terminology employed to describe literary texts and writers over time in CLA Journal and the larger field.