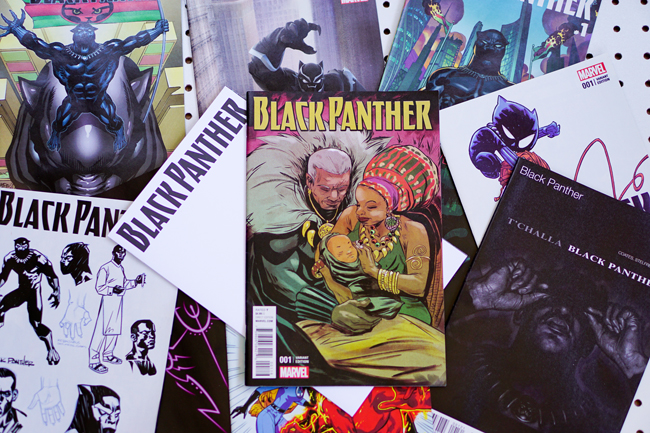 One of the many variant covers for Black Panther #1 that caught my attention was the one by artist Sanford Greene. The image depicts a father and mother with a newborn--presumably a young Black Panther perhaps. Their clothing suggests a time in a somewhat distant past.

The cover image caught my attention in part because of how unusual it is for a comic book cover. Two black parents adoring their child. Under the title "Black Panther."

Listen. The Black Panther Party for Self-Defense and various other Black Power and Black Arts groups of the 1960s and 1970s would have loved seeing and circulating an image like Greene's. In that way, the image has a throw-back quality.

But why go back to the 1960s?  The head-wrap and jewelry adornments of the woman in the image recall 1980s styling as well as those styles of black conscious women of the late 1990s. Remember when Erykah Badu hit the scene?

Sanford Greene has been putting in work for some time now. He's done art for DC Comics, Fox, Disney, Marvel, and more. These days, I'm mostly checking out his work on Power Man and Iron Fist.

In many listings, Greene's Black Panther #1 cover is presented as the "Sanford Greene Connecting" cover. The "connecting" label tips us off to the notion that Greene's image is part of a series. He's also the artist for Black Panther #2 and #3 variant covers. I'll soon write about those eventually and then later, all the covers collectively.

Related:
• List of Black Panther variants and artists
• A Notebook on Black Panther
Posted by H. Rambsy at 8:33 AM