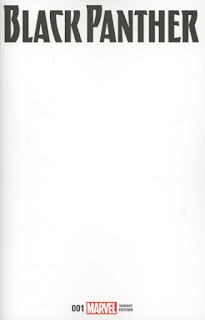 On the surface, a variant with a blank cover seems strange. There's nothing but the title, issue number, and company name (in this case Marvel). No image of Black Panther or a scene from the issue appears to entice audiences. Nothing but a blank white cover.

Terry Hoknes provided a brief history of blank variant covers in comic books, dating back to 2002. There are in fact some blank covers as far as the mid-1990s. Hoknes notes that "2013 is really the break through year where the onslaught of blank variants became an almost weekly event."

Collectors and fans are especially interested in blank covers so that they can get artists to produce sketches on the covers at comic book conventions. For some time now, artists have, for a fee, produced sketches for attendees at the conventions on sheets of paper. The blank variant covers make it possible to compose the original sketches on actual comic books.

Related:
• List of Black Panther variants and artists
• A Notebook on Black Panther
Posted by H. Rambsy at 11:17 AM