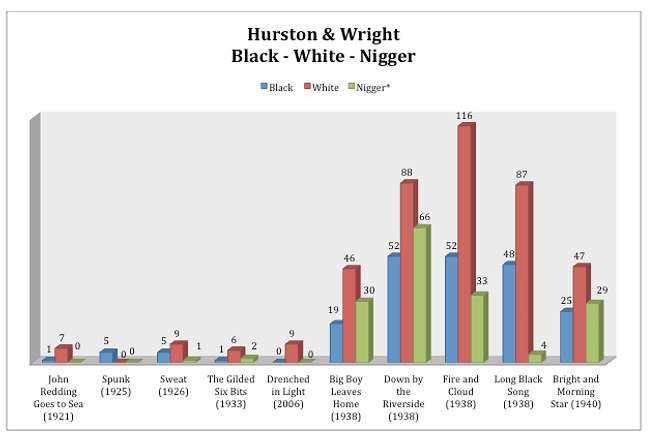 In addition to noting similarities between Zora Neale Hurston and Richard Wright, I used text-mining software to chart some of their differences.

Hurston’s focus on folk culture in Florida and the interactions among working black characters  contrasts sharply with Wright’s emphasis on black-white interactions in rural Mississippi to show the urgency and threat of violence. Wright uses far more racial markers (black, white, nigger) in his fiction in comparison to Hurston.

Hurston was raised in a relatively insular all-black town in Florida, which could explain why her story reflected that environment. In fact, in nearly every instance when Hurston uses the word “white” in her works, she is not referencing white people. Unlike Hurston, Wright, on the other hand, grew up in an environment that was often violently hostile to black people.

During my text-mining analyses of Hurston's and Wright's works, I also honed in on the word “said” to document differences in narration styles. All of the stories by both writers are written in third person. However, on average, Wright uses the word “said” in far greater frequency than Hurston. Wright’s stories have far more characters in comparison than Wright. In Wright's stories, the word "said" is used to clarify what character is speaking. Hurston’s stories use far less characters and readers can better follow dialogues without having to differentiate between many characters.