Social Life of DNA and the African Burial Ground 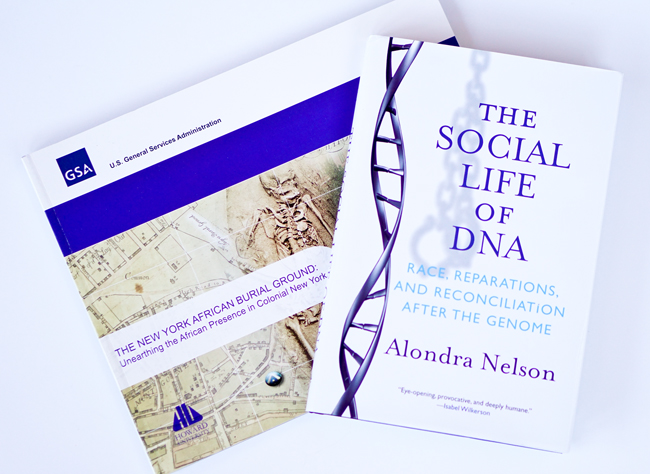 I'm looking forward to returning at some point to the African Burial Ground in New York City. Thanks to Alondra Nelson, I'll be better equipped and primed to soak in much more than I have on previous visits. Her book The Social Life of DNA provides useful information concerning the research back-story at the site.

Over the years, I've taken various groups of undergraduates to the burial ground. Some of the groups were from SIUE, and some of the groups were participants in the summer program, the African American Literatures and Cultures Institute comprised of students from various colleges. When the students and I visit, we usually concentrate on the major frame presented by the African Burial Ground.


The important role of activists in making sure the site was respected and preserved is central to the narrative presented to visitors. In addition, the significance of paying homage to the people buried there are also held in the utmost regard.  What was less clear to me until I read Nelson's work was just how important and really compelling the work being done by scientists and researchers was to the overall process.

Nelson explains how a research team led by Michael Blakey "engaged in skeletal analysis of the remains recovered from the African Burial Ground site to shed light on the experiences of these individuals--insights into nutrition, disease, and the physical toll of enslavement." The team was participating in a "dramatic shift of interpretive register from race to ethnicity and ancestry." For Blakey's team, what was particularly important, notes Nelson, was "the interpretative filter." The effort was to pursue analyses "with an eye for uncovering richer details than mere racial typing would allow" (55).


Visiting the African Burial Ground is often an emotional experience for my students. The idea that they are on sacred grounds of once-enslaved and overlooked black people really moves them. They reflect on the horrors of slavery and what it meant that they had initially thought of enslavement in a southern context.


I've been fortunate to be a witness to so many different students responding to the African Burial Ground as they have over the years. At the same time, I'm going to push for additional kinds of responses moving forward. Drawing on Nelson's work, I'll ask the students to consider what it means to think about Blakey's team conducting "dental morphology studies" as a way of helping to  "ascertain the origins of some of the individuals whose graves were found at the African Burial Ground" (56-57). I'll also ask my fellow travelers to think on the significance of the researchers utilizing what were relatively new methods of "molecular genetic assessment."

In short, we'll try to think about the African Burial Ground in the contexts of African American scientific and technological histories, in addition to cultural and activist frames.