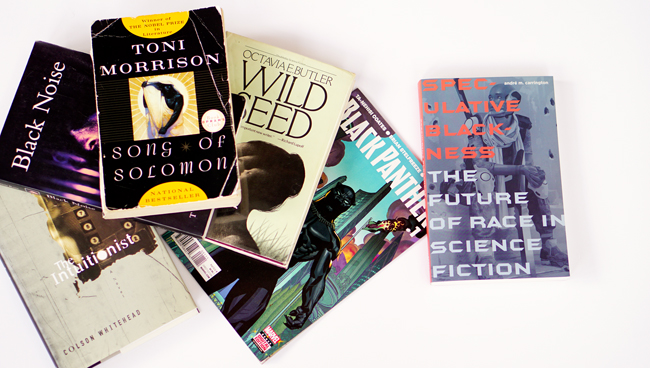 I came across André M. Carrington's Speculative Blackness: The Future of Race in Science Fiction at the right time. Among other topics, Carrington focuses on fan culture, something that has been on my mind lately, especially after teaching a literature course on rap music this past semester.  Only two of the 45 students in the course were English majors. Everyone else was there in large part because they are rap fans.

My colleague Jessica DeSpain taught a course this past semester focusing on Harry Potter. Her students covered fan fiction, and of course prior to the course they had already read all the Harry Potter books and were linked to Harry Potter fandom. Like my students, DeSpain's students identities as fans drove their interest in the course.

Carrington opens his book by discussing the histories of race in speculative fiction fan culture. He covers the origins of Carl Brandon, a made-up black fan created by science fiction fans Terry Carr and Pete Graham in the mid-1950s.

Carrington's research reveals that fans in science fiction communities began wondering out loud what would happen if one of their members was black. At the time, the fans for the communities were communicating through newsletters and fanzines, having limited ways of knowing each others' actual identities. Those conditions created an opportunity for the nonexistent Brandon to gain attention from members of the prominent SF fan-group, Fantasy Amateur Press Association (FAPA). When the opportunity came to accept a black person into their group in the 1950s, "FAPA's elected officers responded with welcoming words for Brandon and affirmed their lack of prejudice" (48).

In his closing chapter, Carrington concentrates on fan fiction, in particular showing how participants extend their interest in African American characters from television shows and films. In 2004 or so, Carrington took over duties maintaining an online archive for a fanfic writer and editor he admired. The archive, entitled "Remember Us" was "the acknowledgement of that people of color are present throughout popular media and significant to many participants in media fandom" (201). Remember Us collected "fan fiction, artwork, and video that portray characters of color from popular media (television, film, comics and graphic novels, and print fiction) in primary and pivotal roles" (204).

In some ways, Carrington's efforts working in a distinct fan group made it possible for him to later produce the kind of scholarly work that he did. Similarly, the two literature courses that DeSpain and I offered this semester were dictated by the presence of fans in the classrooms. Considerations of how fandom shape how undergraduates engage intellectual and academic study deserve more of our attention.