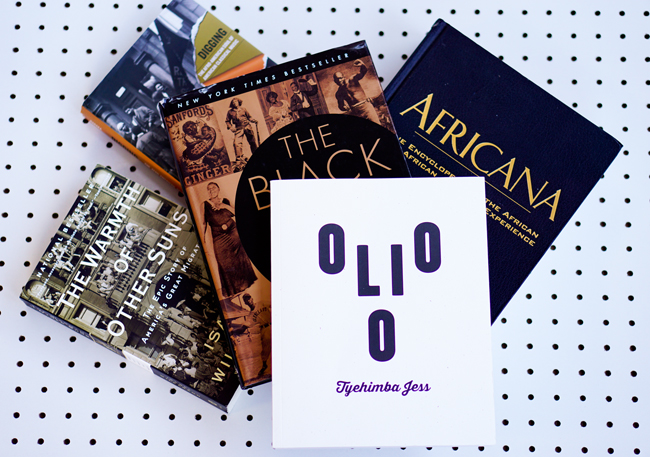 Jess's focus on black music, for instance, reminded me of Amiri Baraka's work, such as in his book Digging: The Afro-American Soul of American Classical Music (2009) and long before that Black Music (1968) and before that Blues People (1963). In Olio, Jess takes us on journeys with several different black musicians: Scott Joplin, John William "Blind" Boone, Sissieretta Jones,The Fisk Jubilee Singers, and "Blind" Tom Wiggins.

There's also a story of migration or travel embedded in Olio. Jess presents this figure Julius Trotter traveling across the country interviewing people about Scott Joplin. The Trotter thread caught my attention as the idea of African Americans and movement, of a different kind, coincides with what I've been learning while covering Isabel Wilkerson's Pulitzer Prize-winning The Warmth of Other Suns: The Epic Story of America's Great Migration (2010).

And you know it's difficult, while considering all those characters, histories of black performance, representations of blackface and the stage in Jess's Olio, to avoid considering Middleton Harris's The Black Book, which Toni Morrison served as editor for while working at Random House in the early 1970s. The Black Book offers these really rich, nonlinear, and sometimes hidden histories. And so too does Olio.

But why stop with The Black Book? Jess covers the kind of historical ground and abundance of characters that will prompt you to flip through the pages of reference works like Africana: The Encyclopedia of the African and African American Experience. That, or Wikipedia.

Either way, when you're reading Olio, you'll realize that the book results in part from a poet pursuing extensive research. During or after the reading, I was prompted to  pursue more research on the intriguing figures Jess introduced.

Related:
• A Notebook on Tyehimba Jess
• Tyehimba Jess and the outstanding Olio
Posted by H. Rambsy at 8:48 AM