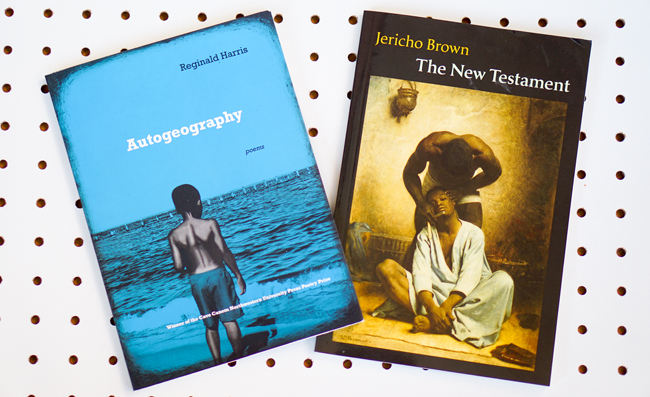 If you're at the spoken word spots around your city, you'll hear all that black vernacular. But if you're reading poetry in volumes, especially the award-winning volumes, the sights and sounds of that vernacular is less apparent. That's what makes appearances of the likes of "Tee-Tee" and "Keyshawn" in Reginald Harris's Autogeography (2013) and words like "'N'em" in Jericho Brown's The New Testament (2014) even more refreshing.

For the last few months, I followed the scholar and poet Bro. Yao (Hoke S. Glover III) working through ideas about what he calls "the empire of language," which connotes among other things, the way language, particularly the English language, structures, frames, and even suppresses communication and thinking. Some of what we're witnessing with the presence of black vernacular terminology in poems by Harris and Brown represents poets creating slight disruptions in the typical modes of credentialed poetry in this country. Or to paraphrase Glover, there are many moments when Reginald Harris and Jericho Brown have decided that they ain't writing for the empire.

They aren't the only ones of course. There's a history stretching back way past Paul Laurence Dunbar, Zora Neale Hurston, and Langston Hughes, to name just a few. That history stretches forward through Amiri Baraka  and Sonia Sanchez through all those countless spoken word artists. And recently, I just happened to be thinking about Harris and Brown.

Vernacular terminology ain't everywhere in their volumes, but the knowing is. In "Eastside Alphabetics," Harris drops terms for each letter, for example, "Beat down," "Down low," "Gospel hip hop," "Ko-Ko," "Old school," "Quick Mart." In his poem "The Lost Boys," he references "Tee-Tee," "Bam-Bam," "Little Man," "Black Charles," and "Jayson," and you know where he's coming from.

In his poem "'N'em," Brown mentions the folks who "unplugged the TV when it rained," folks who had some children who "were not their children" and "some of their parents had no birthdates." At the end of the poem, which spends time remembering these folks, Brown notes that when the new century came "People like me forgot their names." Of course, all of us from where Brown is from know that when and if you don't have time or memory to name everyone, you just say, "and 'n'em." Like, growing up, rather than mention all 10 of the occupants living next door to me, I'd simply say "James and 'n'em," and you knew all the people I had in mind.

At other points in his book, Brown doesn't let all the nostalgic folks off the hook by pretending that African American language practice is only affirming. In "Motherland," he's highlighting the name-calling done by "our mother," who speaks ill of her son's girlfriend, Angel. "Our mother swears the woman's nose is wide enough / To dam the Red River. / Our mother says you could drain a swamp through / The gap in Angel's teeth."

Later, in a persona poem in the voice of a woman named Angel, Brown writes "When you got hips like these...." I paused there and recalled that the mother from "Motherland" had referred to Angel as "too bottom-heavy" akin to "a whore fit for music videos." In those two poems by Brown, we have one woman  talking about her own hips and another talking about the woman's bottom. The attentiveness to the woman's body in those ways is intriguing, troubling, and deeply connected to black vernacular discourse.

All of this is to say, it's worth taking a look when Dunbar, Hurston, Harris, Brown, and 'n'em use language as they do.