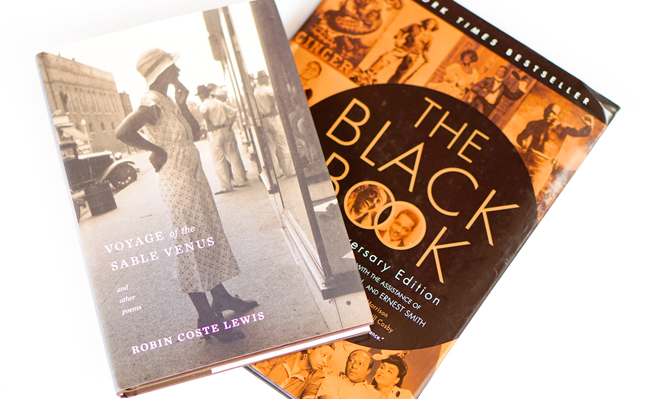 You know the deal around these parts. I've frequently compiled lists and catalogs concerning the histories of African American poetry and poets. Look left, right, up, and down on this site, and you're going to see a compilation of some sort.

Still, I hadn't thought enough about poets as catalogers and list-makers until Robin Coste Lewis dropped this book Voyage of the Sable Venus (2015). Her title poem is an expansive and remarkable treatment of lists, catalogs, and records concerning representations of black people, especially black women. Here's what Lewis wrote in the prologue for her title poem:


What follows is a narrative poem comprised solely and entirely of the titles, catalogue entries, or exhibit descriptions of Western art objects in which a black female figure is present, dating from 38,000 BCE to the present.


I was recently thinking about Lewis in league with catalogers or collectors like Middleton Harris, author of The Black Book -- a kind of scrapbook on African American historical texts and artifacts. The book was drawn largely from Harris's personal collection, published by Random House, and edited by Toni Morrison.

Like Lewis, Harris doesn't just catalog the flattering images and takes on black people. The Black Book contains images of lynchings, racist images from white newspapers, and other documents that demean African Americans. Lewis's poem and Harris's book talk back to troubling depictions, at least, they keep score.


I realized that Lewis is not the only poet cataloger I've studied. Among others, Kevin Young is definitely a collector, and his processes of gathering are made most evident in his roles as editor and curator.  In 2005, he became the curator of the Raymond Danowski Poetry Library—a 75,000-volume collection of poetry held at Emory University. Young edited "Democratic vistas" exploring the Raymond Danowski Poetry Library (2008)--a catalog of the collection, and he has edited anthologies of poetry such as Blues Poems (2003), Jazz Poems (2006), and The Art of Losing: Poems of Grief and Healing (2010).

Amiri Baraka was yet another kind of poet cataloger. He documented a range of black histories in his works, and in particular, he was constantly indexing black music and musicians in his poetry. His poem "I Love Music" name checks several Coltrane songs, and in "Digging Max," Baraka references more than 50 musicians in a single poem.

I'm sure Lewis, Young, and Baraka aren't along in the diverse ways that they draw from these lists and documents and build catalogs in their works. They are, though, good places to start.