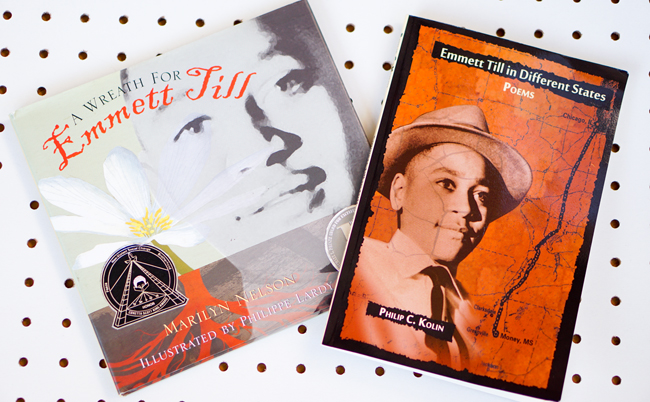 I now own two books devoted to Emmett Till. For one, there's Marilyn Nelson's A Wreath for Emmett Till (2005), a book comprised of a heroic crown of sonnets. And now more recently, there's Philip C. Kolin's Emmett Till in Different States (2015). Kolin's book includes a range of poems, some in persona verse tracing the events leading up to Till's murder and the aftermath. Both books contribute to a growing body of poetry volumes that document the lives and experiences of notable African Americans.

Nelson's volume also corresponds to the volumes that include sonnet sequences. I'm thinking of books such as Natasha Trethewey's Native Guard (2007), Nikky Finney's Head Off & Split: Poems (2011), Patricia Smith's Shoulda Been Jimi Savannah (2012), and A. Van Jordan’s The Cineaste (2013), to name just a few.

Kolin's treatment of a cultural figure in a single volume with persona poems and multiple supporting characters reminded me of books like Tyehimba Jess's Leadbelly (2005) and Adrian Matejka's The Big Smoke (2013), about the boxer Jack Johnson. While Jess's and Matejka's books highlight somewhat heroic figures--a talented musician and boxer, Kolin deals with an infamous historical moment. The murder of Till remains horrifying, even today haunting the ongoing racist violence committed against black boys and men.

By presenting us with a variety of people who interacted with Till or who had links to the incident, Kolin assists us in working through what happened and the aftermath. Toward the end of the volume, there are even poems that include Till speaking to our contemporary moment. In "Emmett Till to Trayvon Martin," Till says "You could be my grandson / we both made history / before our teens expired / our photos walled the world." And he closes noting that "Our bodies became witnesses to crimes we did not committ."

Beyond the subject matter, a commonality between Nelson's and Kolin's works concerns how they takes individual, relatively short poems -- really bits and pieces -- and bring them together to create these whole projects.

Related:
• Those Jet beauties vs. Emmett Till
• Philip C. Kolin fuses art and history in Emmett Till book
Posted by H. Rambsy at 6:44 PM