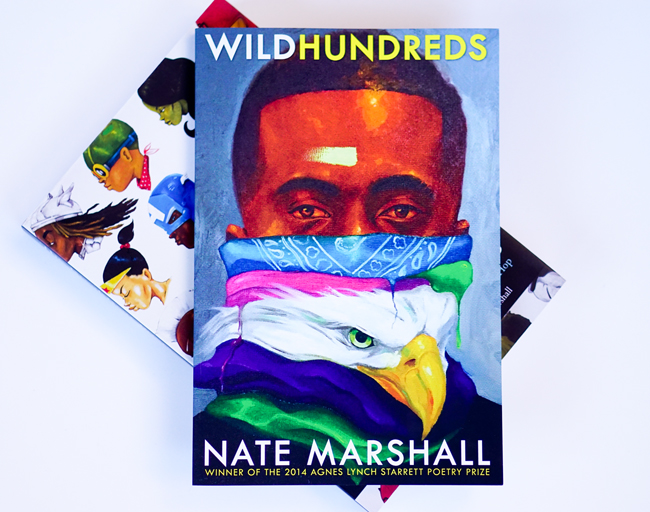 A near-majority of my African American students  have been from Chicago or the Chicago-area. I was thus pleased when I stumbled across the work of Nate Marshall, an emergent poet who's made a really big splash in 2015 -- as author of the poetry volume Wild Hundreds, as co-editor of The Breakbeat Poets, feature artist (as rapper) on the album Grown, and recipient of a Ruth Lilly and Dorothy Sargent Rosenberg Poetry Fellowship from the Poetry Foundation.

His book Wild Hundreds displays a number of poetic qualities. And off the top, what I really enjoyed were his abilities writing Chicago and using poetry to map these distinct spaces or locales. You read the book, and come across several familiar places and issues like: South Side. Roseland. Harold''s Chicken Shack. References to the violence in the city. Pullman Park. The title: Wild Hundreds (so often pronounced, as Marshall notes, "hunits." You read, and realize that this is a book, a writer linked to Chicago.

Over the years, my Chicago-born students had, unknowingly, been preparing for work like Marshall's. They're away from home and so especially inclined to make mention of home. As I read Marshall's poems, I was reconnected to several landmarks and topics that I've heard in conversation.

Wild Hundreds raises, or actually, reaffirms the art and practice of writers mapping out these places, like a Chicago, in their work. We've witnessed Edward P. Jones doing something similar with Washington D., C., in his short stories. We saw Gwendolyn Brooks do it with Chicago in A Street Called Bronzeville (1945). We literally catch glimpses of black folks in the South and in Chicago, among other places, in Richard Wright's pictorial 12 Million Black Voices (1941).

I'm looking forward to re-reading and blogging more about Nate Marshall's poetry. And further, I'm interested in the possibility of introducing Wild Hundreds to my students, raising the possibility of them writing their own neighborhoods, cities, and locales.
Posted by H. Rambsy at 6:34 PM