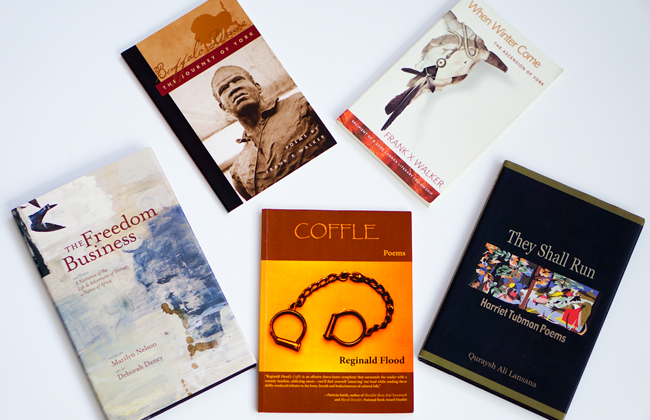 Beyond his Frederick Douglass poems, Reginald Flood's volume of poetry Coffle (2012) also contains poems focusing on Mary Prince and Harriet Jacobs. The poems extend our growing body of contemporary poems on slavery and struggles for liberation. At the same time, the poems reveal Flood in conversation with figures such as Kevin Young, Natasha Trethewey, Marilyn Nelson, Frank X. Walker, Quraysh Ali Lansana, and so forth.

Flood's "After the Attic" is written from the first-person perspective of Jacobs in 1857, years after she's escaped enslavement. The attic is a reference to the place where Jacobs hid for an extended amount of time (7 years) while alluding her captors. In the poem, Jacobs notes that "I will not, I will not tell everything." She reflects on being haunted by what she had to endure while enslaved and exploited.

In an even more extensive poem ""Mary Prince Tells Her Own History," Flood takes on the perspective of Prince as she looks back on her experiences in slavery as well as what it meant for her to share her experiences with her amanuensis Susanna Strickland. Flood's Prince notes that "Miss Susan changed my words to hurry my life; she couldn't write why I was sold twice: about bloody bed sheets, dirty water." The poem indicates that readers want a sanitized view of slavery.

There's an important idea running in both those poems that rightly suggest that readers don't as much as we thought about these two fairly well-known historical figures, Prince and Jacobs. With these poems as well as his Douglass poems, Flood gives us a view of famous ex-slaves outside of slavery. Two of Flood's Douglass poems are set in London, placing one of our most famous slaves in a European contexts.

Among contemporary poems focused on enslaved figures, we have a smaller number of representations of black women. Thus, Flood's poems on Jacobs and Prince are especially useful contributions.