Reading Ta-Nehisi Coates (while black) in 2015 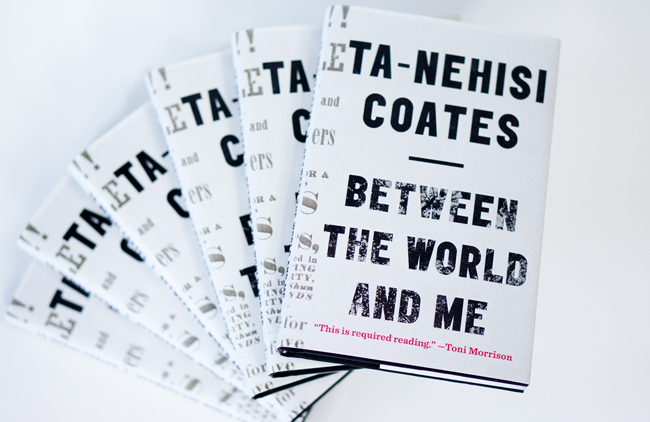 In addition to my 2015 poetry reflections, I wanted to offer a few notes on reading and re-reading Ta-Nehisi Coates this past year. I know he's appeared on all the "best books of 2015 lists;" received many accolades; and his work has been the subject of extensive coverage.

Hasn't enough already been said about Coates this year? Nah, folks somehow got distracted and started wondering too much about the nature of his "white audience." I suppose that's important in some ways, but that line of thinking was starting to remind me of people repeatedly reminding us that the largest audience for rap music is comprised of "white boys from the suburbs." Ok, maybe, but those observations don't help us account for how and why black audiences engage the music.

I first began reading Coates in 2003 or so. Strangely enough, it was a shared interest in understanding this figure Condoleezza Rice that brought my reading to his writing. Back then, I was researching Rice, who was National Security Adviser, and I stumbled onto Coates's article "Rice, Rice Baby" published in the Village Voice. The Rice article was humorous, and I took note of how the author described himself: "I'm one part lefty, one part race-man. If you cut me I'd bleed green—then red and black, too," who was also "a Black Panther-sired, Malcolm X-worshiping, People's History of America-toting idealist."

So I started keeping track of his work and was somehow there on August 4, 2008, when he began blogging for The Atlantic. One of the limits of James Baldwin and Coates comparisons, by the way, is the tendency to downplay the significance of online or digital culture in the trajectory of Coates's career. He was clearly writing and publishing in analog formats prior to his work at the Atlantic; still, his blogging, along with his online reception, were crucial to his development and overall reach.

This past summer, when I realized (via social media) that various people were receiving advance copies of Coates's Between the World and Me, I dropped him a line on Twitter requesting one. No problem, he had his publisher send me an advance copy, which I read and enjoyed.

In June and July, I was reading the book on its own terms, and in the context of Coates's overall body of writing. Aspects of Between the World and Me correspond to some of the topics he covered on his blog; then too, the personal reflections in the book read, in a way, like a sequel to Coates's memoir The Beautiful Struggle. When I sat down to blog about Between the World and Me, I did so with an eye toward African American literary and book histories, as I figured that the reviews in mainstream venues would cover other aspects of the book.


In June, my main problem with Between the World and Me was its initial publication date. I was going to be leading an online discussion group comprised of collegiate black men at the start of the semester, but Coates's book was scheduled for an October release. What would I  have the guys read until then, I wondered? As it turns out, Coates's publisher decided to release the book sooner than originally planned, so the guys and I were able to begin covering Between the World and Me on September 9.

The project went well. I viewed the online discussion of Between the World and Me as a "preliminary read" with students, meaning I mostly had them identify and explain why aspects of the book that really caught their attention. The plan is to assign the book for an extended read in one of my literature courses in 2016. The responses from guys in our 2015 online reading group will serve as prompts for the future students.

While my guys were immersed in Between the World and Me, I was also checking out Coates's new long-form piece "The Black Family in the Age of Mass Incarceration," complemented by his commentary about the topic on  his Atlantic blog. In December, I was reading his blog entries concerning his preparations for one of his next projects, the Black Panther comic book, which suggests that a year from now, I'll have more to report on reading Coates.