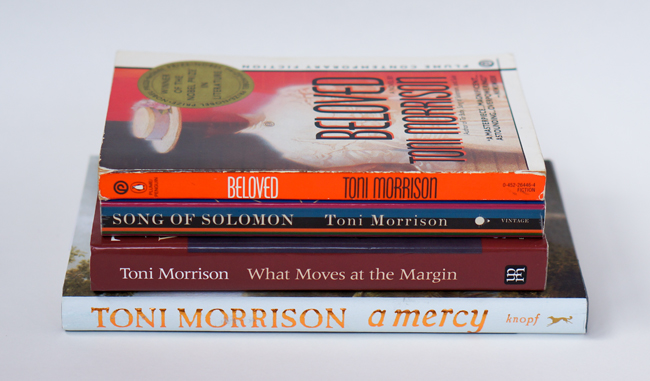 If you calculate and weight the citations on Google Scholar and JSTOR for the 500 most well-known works in American fiction (novels and short stories), guess what book comes out on top? Yep, exactly, Toni Morrison's Beloved (1987). Her novel appears ahead of The Great Gatsby, ahead of any novels by Faulkner, ahead of everything else.

What's even more fascinating in my view is that 5 of the top 10 books with the most citations are by African American authors. Morrison is joined by Ralph Ellison's Invisible Man (#2), Alice Walker's The Color Purple (4), Richard Wright's Native Son (5), and Zora Neale Hurston's Their Eyes Were Watching God (#6).

I'm drawing these findings from Metacanon.com -- "an interactive canon generator that measures the canonicity of literary works based on the number of citations they have received in scholarly journals." Here's more on the project from its "about" page:

Metacanon is an interactive canon generator. You can use this as a more flexible and inclusive alternative to the various "greatest books" lists published by entities like Modern Library. The current version of Metacanon only includes 20th century American fiction, but future versions will be expanded to include other genres, periods and nationalities. The current list of 1000 works is based on a master list of over 2000 American novels and other works of fiction published between 1900 and 1999.


The "about" page also describes how the scores are calculated.


Among other things, the results on the site offer useful ways for thinking about where African American literary works fit within the context of American literature. That kind of information is important for our SIUE literary studies group, which consists of Tisha Brooks, Elizabeth Cali, Lora Smallman, and me. When we submit grants about our work on African American literature, the judges, few of whom are specialists in our field, request that we do more to explain how our work relates to a more general field. To some extents, they would like to hear about how black writers relate to familiar white writers.


Yet, as Metacanon reveals, Morrison's Beloved sits atop the list of 500 fiction books. Note too that 4 of Morrison's novels -- Beloved (#1), The Bluest Eye (#12), Jazz (#13), and Song of Solomon (#16) -- appear in the top 20. William Faulkner and Ernest Hemingway both have two novels on the list, while every other novelist is represented by only one work, emphasizing again Morrison's distinct popularity.

I just discovered Metacanon yesterday, so I'm still exploring. But I'm already excited about the possibilities. I'll continue taking a look and publish a few blog entries concerning my observations and discoveries.