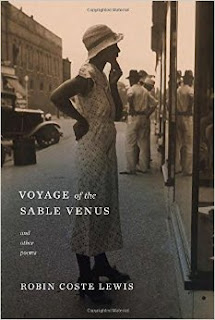 When and if we start talking about ambition in contemporary African American and American poetry, then one book that we'll certainly include in the conversations will be Robin Coste Lewis's epic "Voyage of the Sable Venus," the title poem in her volume Voyage of the Sable Venus and Other Poems (2015). Lewis notes in the prologue that this "narrative poem is comprised solely and entirely of the titles, catalog entries, or exhibit descriptions of Western art objects in which a black female figure is present, dating from 38,000 BCE to the present."

Listen: Poets rarely almost never take on such an expansive scope. In the context of African American poetry, "historical" poems are often those that focus on aspects of slavery. Poems about enslaved people and struggles for liberation, in fact, constitute one of the most distinctive elements of modern and contemporary black poetry. But it's unusual to encounter a contemporary poet concentrating on black people that goes so far back prior to the 19th century. It happens, but it's extremely rare.

Lewis moves across thousands of years of materials. In the process, "Voyage of the Sable Venus" greatly expands the parameters of what falls within the realm of historical coverage in African American poetry. By far. I'm aware, of course, of M. NourbeSe Philip's powerful book Zong!, which utilizes a court ruling concerning the 1781 massacre of enslaved people on a slave ship. Lewis's long poem corresponds with Philip's work; however, what distinguishes "Voyage of the Sable Venus" is the immense number of sources from which Lewis draws her material.

I've spent some time over the years mentioning poet-researchers -- often evidenced by the notes and paratexts in books where writers acknowledge primary documents that they consulted in the production of their poems on a historical figure. Natasha Trethewey's Bellocq's Ophelia (2002), Elizabeth Alexander's "Amistad" (2005), Kevin Young's Ardency: A Chronicle of the Amistad Rebels (2011), and Adrian Matejka's The Big Smoke (2013), to name just a few examples, resulted from poets drawing on a range of books and other historical documents. Lewis clearly qualifies as a poet-researcher, but there's something else.

"Voyage of the Sable Venus" includes the specific terminology from catalogs and exhibits of art objects, and Lewis's reconfiguration of the descriptions as poems suggest that she is a poet-curator or even a kind of poet-dj, mastering the art of remixing, sampling. The play or creativity is in the arrangement and re-arrangement of words and phrases from the exhibit titles and catalog entries. And it's one thing to re-arrange a title here and there; it's something else when one takes on so many art objects--paintings, sculptures, installations, photography, etc., again "dating from 38,000 BCE."

There's definitely a need for ambition, or really an expansive poetic and curatorial vision, if the task is to confront the vast histories of black female figures in Western art. It's not unusual for poets to compose poems that respond to works of art. Consider well-known pieces like W. H. Auden's "The Shield of Achilles," Rita Dove's "Agosta the Winged Man and Rasha the Black Dove," or William Carlos Williams's "Landscape with the Fall of Icarus."

Yet in "Voyage of the Sable Venus," Lewis responds to the catalog entries, the exhibit descriptions, the exhibit titles. She's looking at the collectors, the museums, the curators. It's an extraordinary work of art as well as a poetic catalog featuring representations of black female figures in Western art.
Posted by H. Rambsy at 4:12 PM