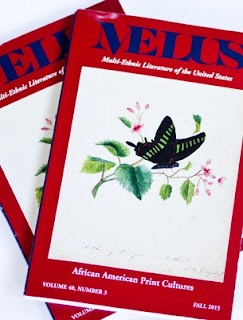 I've said before, so I'll say again: Joycelyn Moody is like a super-hero. Maybe she doesn't leap tall buildings, but she's often inclined to do things that regular folks in the field wouldn't do.

When we were organizing the special issue on African American print culture for MELUS, Moody developed a list of various leading scholars in our field to serve as anonymous readers.

"These folks are too busy," I said. "They won't have the time."
"Doesn't hurt to ask," Moody responded.

I was mostly wrong. Almost all of the scholars responded and agreed to serve. We literally had this All-Star group of anonymous readers. Moody essentially got select and distinguished senior scholars to agree to read the works and offer comments to primarily junior scholars. It's uncommon to get that buy-in from so many accomplished senior scholars at one time for a single issue.

A group of those senior scholars helped us make decisions about the articles to publish. We ended up with 9 scholarly articles, and Moody ensured that at least one and sometimes two senior scholars read and critiqued those works.

The contributions of those anonymous readers are largely invisible. Nonetheless, the process and Moody's leadership on the matter gave me ideas about doing more to reach out to senior scholars to assist junior scholars. I realize folks are busy and don't always have enough time. But, it doesn't hurt to ask.

Related:
• Notebook on MELUS and African American Print Culture
Posted by H. Rambsy at 11:56 AM