Discovering Kinohi Nishikawa & his work on "lostness" through MELUS 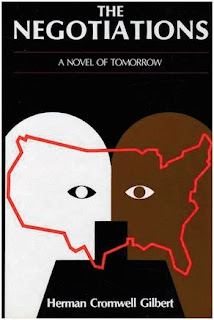 Talk to many scholars who've edited book collections or special editions of journals, and they might dissuade you from following a similar path. The process is time-consuming and tedious. And sometimes, it's difficult to see the rewards.

But there's an alternative, sometimes underground narrative. Joycelyn Moody, my collaborator for the special issue on African American print cultures for MELUS, informed me that the possibility of finding out what people in the field are working on was one main reason to work on special issues. She was right; the "call for papers" could put you in touch with new scholars and scholarship.

One, among many, big discoveries for me while working on our special issue was Kinohi Nishikawa and his work on print culture. Perhaps, I would have eventually come across Nishikawa's work, but thankfully, I encountered him as we worked on the issue.

For some reason, much of African American print culture concentrates on works produced during and prior to the 1920s. Scholars who study 19th-century American and African American literature are far more likely to produce studies on print culture and book history, as least using those terms, than late 20th and 21st century scholars. That Nishikawa was producing book history on a novel published in the 1980s was unusual.

In his article "The Archive on Its Own: Black Politics, Independent Publishing, and The Negotiations," Nishikawa explains that:


the true value of The Negotiations lies not with canonical legitimacy but in its historical “lostness”—the fact that it spoke to African American readers' experience of a moment when it seemed anything was possible. In order to reconstruct a meaningful sense of lostness, the critic should attend to the archive on its own rather than seek intellectual legitimacy from the academic field formation.

Nishikawa's notion of "lostness" had my mind moving in all kinds of directions. When and how do books become lost to history, so to speak? What can we learn by studying, as Nishikawa notes, "a work’s obscurity"? And Nishikawa provided some of the questions, like, "Why should we care about something whose relative insignificance is the point to be driven home?"

How fitting that I discovered this thoughtful scholar producing work on the value of lostness.

Related:
• Notebook on MELUS and African American Print Culture
Posted by H. Rambsy at 8:34 AM