A tally of digital communications


So far this semester, I coordinated a few different activities based on Clive Thompson's Smarter Than You Think: How Technology Is Changing Our Minds for the Better (2013).  I'm teaching his book in my three literature courses -- one general intro to literature class and two African American literature classes.

One of the most exciting activities we did, based on Thompson's chapter "Public Thinking," involved us tracing our social media and email usage over the course of 5 days. I designed a worksheet and asked all my students -- a total of  120 -- to tally their digital communication usage.

The instructions for the students: Based on our reading and discussion of the “Public Thinking” chapter of Smarter Than You Think, let's track our digital communication output over the next few days. From Thursday – Monday, I would like you to document your daily numbers of email messages, text messages (how many you send), tweets on Twitter, Facebook (numbers of messages and posts), Instagram posts, and SnapChat posts. 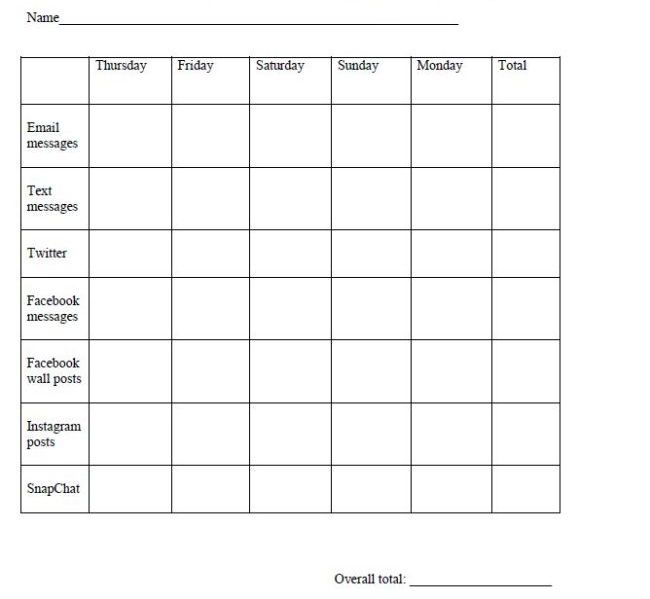 Some of the students were amused and startled that my own tally sheet revealed that I sent more than 20 emails. One of my students told me that she had initially thought I was younger, that is, before she discovered how much I utilized email. "Only older people still use email," she informed me.

When I began teaching at the university in 2003, social media sites like Twitter and Facebook did not exist. But now, several students even referred to those modes of communication as out of fashion. After text messages, the most frequently used service, by far, was SnapChat. Next was Instagram. A few outliers frequently used Facebook messaging to communicate with friends. I was surprised that relatively few students used Twitter.

In class, we worked in groups and tallied our digital communication sheets. During our debriefing session, many of the students, especially those super-text messagers, acknowledged that they knew they sent "a lot" of messages, but had no idea they were sending so many until the tally exercise. As a result, we've been discussing the limits and possibilities of relying on a single mode of communication.

Related:
• A Notebook on Clive Thompson's Smarter Than You Think
Posted by H. Rambsy at 8:17 AM