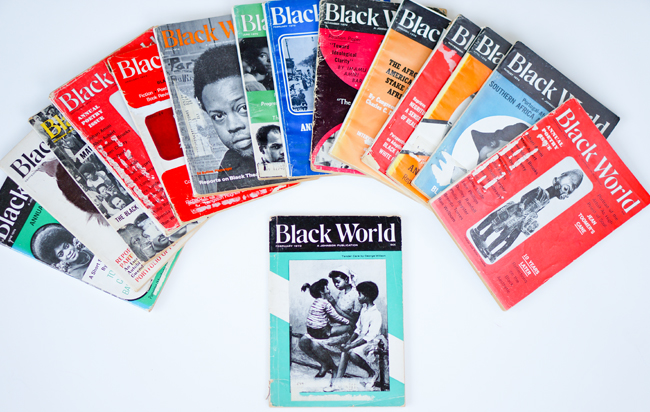 Quiet as it's kept, Hoyt Fuller, the managing editor of  Negro Digest/Black World, was the leading figure in the promotion of a black aesthetic, which was in fact many black aesthetics. Often, scholars concentrate on Addison Gayle's work with the concept because he edited the anthology The Black Aesthetic (1971). However, in the mid to late 1960s, Fuller was the one who introduced the term and organized a survey of dozens of writers offering their thinking on the term.

Beyond the term itself, I've been thinking more about the visual possibilities of black aesthetics as I cover issues of Negro Digest/Black World. The publication includes countless African American cultural signifiers presented in photographs, illustrations, and key words. We get references to diaspora. We see a recurring group of writer names. The very words "Negro Digest" and "Black World" signal aspects of African American aesthetics.

I'm still working through my ideas concerning the display of black aesthetics in Negro Digest/Black World. What the convergence of images, words, and colors may have meant for an African American readership is certainly worth considering.