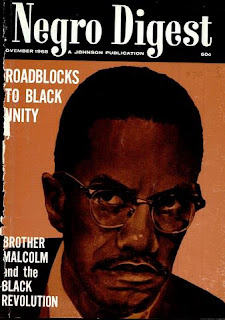 Reading through issues of Negro Digest/Black World, it becomes apparent that "Malcolm X" was one of the most frequently referenced figures of the era. From the late 1960s to early 1970s, Malcolm was an important muse for poets. Several poems were dedicated to the leader after he was assassinated in February 1965.

The search function with the online issues of Negro Digest/Black World clarify that Malcolm was mentioned by poets, scholars, short story writers, and editors. In fact, I view "Malcolm X" as one of the central keywords in black arts discourse, in part because of how much he was mentioned in various publications by so many writers.

An image of Malcolm appears on the cover of the November 1968 issue of Negro Digest. In the issue's lead essay "Brother Malcolm and the Black Revolution," poet  W. Keorpetse Kgositsile notes that "the reoccurrence of Malcolm's spirit is the source of our power, the power of the best possible productive uses of our lives." Writers of the era had perhaps absorbed those kinds of ideas. Indeed, recurring mentions to Malcolm were apparently sources of power or at least inspiration.