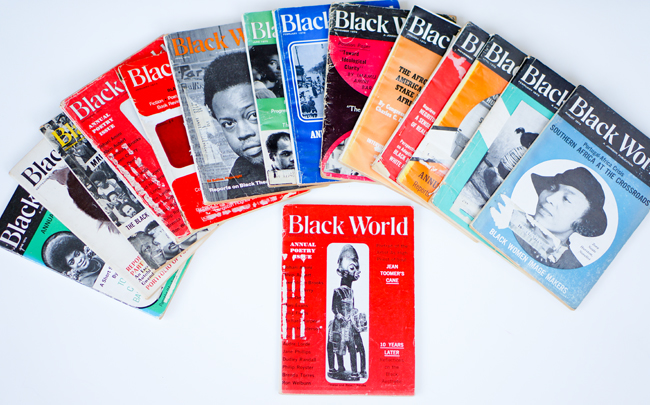 Negro Digest and then Black World magazine displayed one of the most remarkable bodies of work related to black diaspora by a nationally-distributed African American publication. When I began reading Black World magazine as an undergraduate, I was not fully aware that I was tracing such a rich history concerning black people in countries all across Africa, in South America, the Caribbean, and Europe.  But there it was, all these worlds in Black World.

The cover of the November 1972 issue of Black World contains an image of Brazil and the subtitle "Racial Polarization in the Developing Giant." The lead article for the July 1969 issue of Negro Digest concentrates on "Swahili and Black Americans." The March 1976 issue of Black World contains articles on Angola as well as a "report from the South Pacific." The May 1969 issue of Negro Digest includes the articles "Black People in the Middle East," "Black Power with a British Accent," and "Black Consciousness in Brazil."

Even the imagery for the publication signaled diaspora. The covers of the July 1975, September 1974, February 1974, May 1973, November 1971, and May 1970 issues of Black World magazine contain images of African sculptures. The cover of the May 1972 issue of Black World contains the words "W. E. B. Du Bois in China" and an illustrations of Du Bois and Mao Zedong. The cover of the August 1969 issue of Negro Digest includes an illustration of the continent of Africa with the question "Should Black American be Involved in African Affairs?" written in the center.

At some point while taking a social media break, I came across the following:


No theory of diaspora without a history of imperialism.
— The Public Archive (@public_archive) September 3, 2015


That tweet from The Public Archive helped me better understand aspects of Fuller's treatments of diaspora. He was not merely celebrating the idea that black people were all over the world. Instead, his observations and those of others often highlighted the problems of colonialism and imperialism. The publication provides a histories of diaspora yes, but also the struggles of black people dealing with the effects of white supremacy across the globe.

In the 1960s and 1970s, Fuller and Co. covered news and published reports. In retrospect, Negro Digest/Black World was also producing a tremendous public archive concerning theories of diaspora, histories of imperialism.