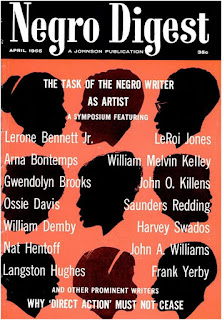 In the April 1965 issue of Negro Digest,  Hoyt Fuller included responses from 36 authors to the question:

To help the reader--and young writer--to understand both sides of the controversy, Negro Digest invited some 36 writers, famous and relatively unknown, black and white, to state what they feel is "The Task of the Negro Writer as Artist." On the following pages, the writers speak.

One writer chose not to adopt the language of the question. Rather than explain "the task of  Negro writer," Amiri Baraka (then known as LeRoi Jones) decided to take a slightly different path. "The Black Artist's role in America," he wrote in his response, "is to aid in the destruction of America as he knows it."

In addition to offering a notably militant response, Baraka rejected "Negro" in favor of "Black," and he also chose to focus on the "artist's role," as instead of the "writer." In April 1965, Baraka was two months into his his "black arts" enterprise in Harlem with a group of poets, musicians, playwrights, arts organizers, and supporters of the arts.

Negro Digest provided Baraka with a national audience to begin shifting the terminology from "Negro writers" to "Black Artists." That shift in terminology was a consequential development in African American literary discourse.