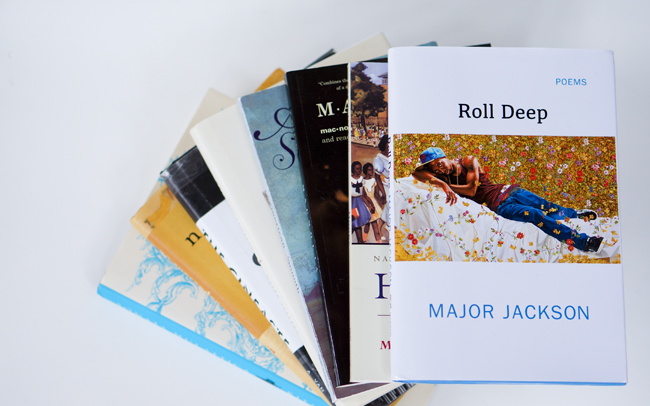 There's this longstanding tradition in African American expressive tradition where poets focus on "bad man" figures. John de Conqueror, Stagolee, and Shine were some of the early folk anti-heroes, for example. In recent years, we've had Tyehimba Jess take up Leadbelly and Adrian Matejka on Jack Johnson. Before that, we had Cornelius Eady repping a bad man in Brutal Imagination and a host of poets, including Elizabeth Alexander, Evie Shockley, Vievee Francis, Tim Seibles, Frank X. Walker, and many, many others writing in the voice of ex-slaves like Frederick Douglass and Nat Turner.

And now, Major Jackson enters and diversifies the poetic discourse on bad men in his new book Roll Deep (W. W. Norton, 2015). In one suite of poems on Kenya, Jackson writes in the voice of a child soldier. The poem is gripping for multiple reasons and pushes us to consider the circumstances of a boy forced to behave badly.

Jackson presents a 15-year-old who was initially "thinking it would be fun to play / war,/ to solider tough, walk with an AK." Earning money as a solider seemed like a sensible escape from a troubled life: "U.S. cash would buy more than respect; / I would take care of my sisters."

The life of a young solider, though, was far less glamorous than he anticipated. As child soldiers, the boy and his peers were forced to "tow ammunition," prepare land "mines and roadside bombs," and clean "guns / as big as us." Eventually one of his superiors commanded the boy to kill his best friend. "Now and then, they do this [have child soldiers kill friends] to test our trust."

The murder haunts the boy:


I see him in my dreams
He talks! Wonders why. I killed him for
nothing. I sleep. I cry. I thought Allah the Supreme,
the merciful, would have us love the war
with infidels, not my friends. I had to escape.

He eventually flees and ends up in a refugee camp.

Jackson's poem raises all kinds of questions about the implications of bad man poems. Where does a child solider fit within the paradigm? How much responsibility do readers and a society place on children who follow commands to kill other children? How manly and childlike is a 15-year-old soldier? How bad and innocent is a child solider? And how does a poem by an African American about an African boy struggling to escape Africans correspond to and depart from our understanding of slave narratives?

In the context of bad man poetry, Jackson's poem stands out based on how because of the age of his protagonist. Or, with such a young central character, Jackson raises the possibility of "bad boy" poems. Either way, Jackson's "child solider" places new, challenging demands on readers, and at the same time, he  diversifies the poetic discourse.

Related:
• The travel writer as poet: the case of Major Jackson
• Major Jackson & the W. W. Norton black poetry mix
Posted by H. Rambsy at 9:27 AM