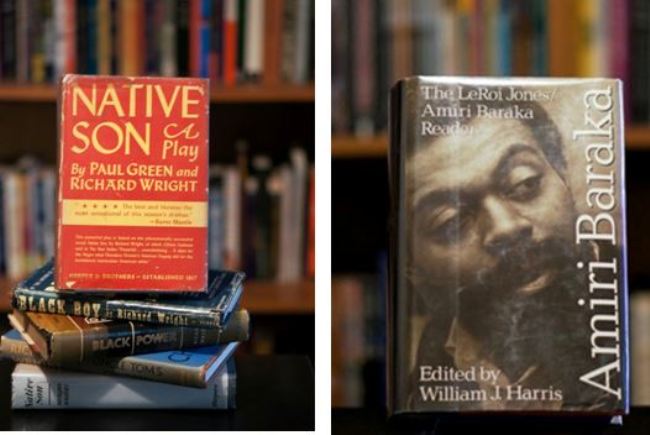 Those are some serious commitments.

The focus on time, by the way, is all me. You won't catch Professor Ward calculating the years he's studied Wright. Professor Harris never mentions how long he's studied Baraka. You only pick up on the time span in the margins or in the footnotes of some conversation.

You'll remember that buried in a letter or email Professor Ward noted in passing that he read Wright's Uncle Tom's Children during his senior year at Tougaloo College, which was 1963-64. You know he wrote his dissertation on Wright during the 1970s. You noticed that in a recent article in the Boston Review on Baraka that Preface to a Twenty Suicide Note (1961), "came out when I was in my late teens," noted Professor Harris, "and helped me to find my direction as a young poet." They leave it to you to figure out how long they've been reading, thinking, conversing, and writing about Wright and Baraka.

They could, if asked, talk about what it was like to study Wright or Baraka in the 1960s or the 1970s  or during the 1980s or in the 1990s or 10 years ago. But that's only if you pressed the point. If they're directing the conversation, then they're mostly going to mention where Wright Studies and Baraka Studies could head next.

Notably, the focus on these two select authors has not prevented broader conversations on various other writers and topics. Just the opposite in fact. For Ward, Wright is one of many southern writers he wants you to consider; for Ward, Wright is one among dozens of global writers he wants you to consider. Ward advocates for Wright, and at the same time, he advocates for studying countless writers he feels have been overlooked.

It matters that Wright and Baraka were "difficult" men. Wright's Bigger is "controversial," for instance. And Baraka's, well, Baraka's Baraka is controversial. You learn a lot observing Ward and Harris navigating the   controversies related to those two authors. You learn something watching them pointing out missteps of figures that they deeply admire.

I know of many, many scholars who value the works of Toni Morrison. I know of many who value James Baldwin and Zora Neale Hurston and Frederick Douglass and Alice Walker and Lucille Clifton. But what's rare about Ward and Harris is the extent to which they display intellectual and artistic kinship with their subjects. Recall, for example, at a formative moment in his life, Professor Harris received "direction" from Baraka's works.

Ward on Wright and Harris on Baraka are crucial counterpoints to arguments I've made about studying major authors. Ward's and Harris's own works confirm that it's possible to focus on major authors and various other figures. Their serious commitments have been anything but provincial.

During the processes of teaching about Wright and Baraka, Professor Ward and Professor Harris were conveying, absorbing, rejecting, and constantly revising a broad range of ideas. They were transmitting invaluable lessons well beyond realms of literature. That they've done these things while focusing on two recurring subjects for over half a century now is outstanding. It is, in the end, the nature of Jerry W. Ward, Jr.'s & William J. Harris's serious commitments.
Posted by H. Rambsy at 8:56 AM