During the holiday break  in late 1997, I informed one of my former teachers that I would be attending New York University (NYU), as part of an exchange program, during the 1998 spring semester. My former teacher, Mae G. Williams, suggested that I contact her brother, who lived in the city, when I arrived. I would like him, she said, and he has a really impressive book collection.

Sometime in January 1998 after arriving in New York City, I called Donald Garcia and arranged to meet him. We met and since that time, we've had a wide-ranging, now 17-year conversation about ideas, books, history and historical figures, traveling, music, and everything else. And that book collection?  Amazing.

I began deliberately creating my own personal library only after viewing the Mr. Garcia's marvelous collection. I had never before seen so many books, covering such a variety of topics in a single home. It was like exploring some tangible world wide web.

I was earning a degree at Tougaloo College and pursuing studies for a semester at NYU, yet I participating in a distinct and important underground curriculum by learning from and conversing with Mr. Garcia about his book collection and tagging along with him on trips throughout the city.


My formal undergraduate courses mostly consisted of primary reading materials -- novels and poetry, for instance. Mr. Garcia went much further in making me aware of scholarly discourses, and especially biographies. W. E. B. Du Bois was important, noted Mr. Garcia, but so too was David Levering Lewis, whose W.E.B. Du Bois: Biography of a Race, 1868–1919 (1994) was awarded a Pulitzer. He made me aware of biographies he had read by Arnold Rampersad, Martin Duberman, Taylor Branch, and others.


The biographies were just one realm. I had previously heard a few people mention bell hooks, but none of them were as versed in her overall body of work as Mr. Garcia. By 1998 when we met, Mr. Garcia had read, no, he had read and absorbed all of the more than 12 books that bell hooks had published up to that point. He moved from bell hooks to several related writers, and for my time in New York, Mr. Garcia was unknowingly my teacher for an out-of-class black feminist course.

Mr. Garcia and I spent many Saturdays visiting various used bookstores. On our visits to stores, we would walk in together, go in different directions, and then after an hour or so, meet again to trade notes on what we had discovered.  At a number of small bookshops and among street vendors, proprietors gave Mr. Garcia warm greetings, having gotten to know him over the years. I had no idea then that many of the shops and book vendors would eventually go out of business or relocate out of the city, in part based on the rise of online book selling and buying. But back then, there were too many bookstores to visit in a single Saturday.

Mr. Garcia introduced me to the Strand Bookstore. That introduction proved especially important. Over the years, I've in turn introduced dozens of students to the Strand.


During breaks in our "book tours" throughout the city, we had lunch in various places in the city. We continued our conversations and lunches during my visits to New York when I was a graduate student at Pennsylvania State University and during my visits to the city after becoming a faculty member at SIUE. On one visit in 2008, we went to Sylvia's restaurant in Harlem, and when Sylvia Woods, the owner, came out to greet Mr. Garcia. He stood; they began talking; and I began snapping photographs. 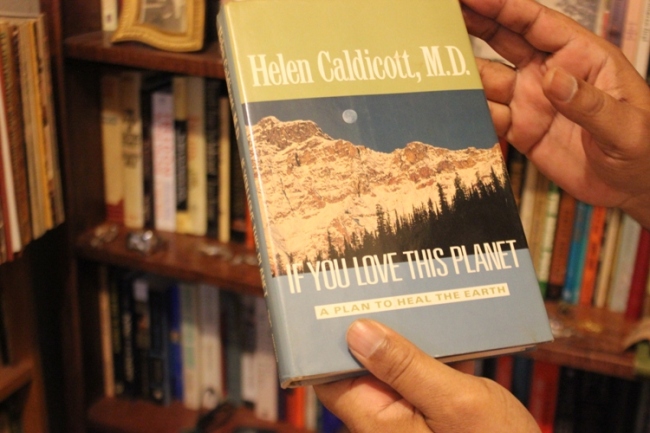 In my recent visit with Mr. Garcia last week, our conversation somehow led to Mr. Garcia going to his shelf and picking up a book by anti-nuclear activist Helen Caldicott. Earlier we had been discussing works by John Hope Franklin, and when an expansive biography of the historian might appear. Later, Mr. Garcia talked about Ulysses S. Grant's memoir, as I flipped through the book. Then, we were discussing...well, various other ideas, books, historical figures, and everything else.
Posted by H. Rambsy at 6:41 PM