We're a team, but not that kind of team 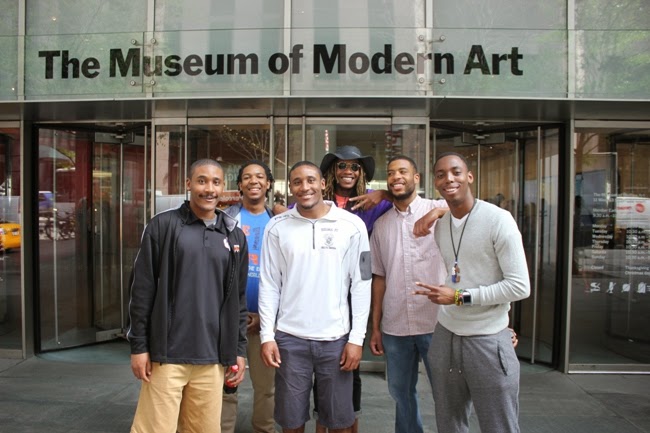 Early during our trip, as we waited for our flight from St. Louis to New York City, one of our travelers joked that the make-up of our group (8 black men) might lead people to think we were a basketball team. In retrospect, the joke was somewhat prophetic.

At least twice each day, from Sunday, May 10 - Wednesday, May 13, different people approached us and asked one of two questions: "Are you a basketball team?" or "Are you a football team?" The guys were good-natured about the questions, which they heard a couple more times when I was not in their presence.

To be fair to our questioners, during this time of year, young guys, especially African American men, are often traveling to basketball camps. Maybe that's why we were mistook for basketball team?

At some point, we began wondering about creative ways we might respond. We were some kind of team, after all, right? If so, what  was our activity? How might be label ourselves? What were we competing for? Where were we headed to compete, when was practice? How good were we?

Not all our lines of inquiry were so fun. We wondered about the implications of repeatedly being viewed only as athletes. Was the idea that a group of black men being traveling together simply to visit the MoMA, a venerable bookstore, and the African Burial that strange and unusual? Why was "sports team" everyone's default setting when they saw us?