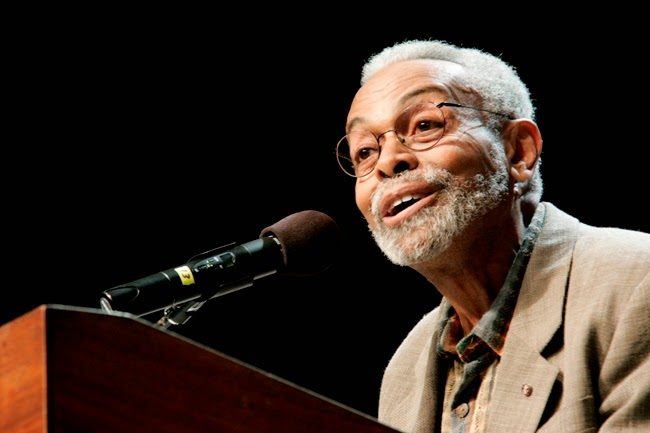 Over the years, of the one hundred or so poems that I cover, collectively, with students each semester, the most laughter emerges when we're reading Ishmael Reed's "Flight to Canada," various poems by Amiri Baraka, and a few pieces by Kevin Young. Students have also found Langston Hughes's Madam Alberta K. Johnson poems amusing. Soon, I'm fairly sure that I'll hear some laughter when we add Tony Medina's poems to the rotation in classes next fall.

Generally, people laugh at jokes because joke tellers find ways to present them with unpredictable outcomes. As Sam McNerney notes in an essay on why we laugh, "Good jokes succeed by leading you down a path of expectations only to fake you out at the last minute."

I've discovered that part of the amusement for my students with the poems we cover relates to the fact that so few of them arrive in the class expecting poetry, especially black poetry to be funny. So when students encounter jokes in Reed's poem about an ex-slave they laugh at the jokes, but they are also responding to the surprise of finding humor in a poem related to slavery.

Baraka's low coup poems, such as "In the Funk World," always get collective chuckles:


If Elvis Presley is King,
Who is James Brown?
God?!?!

The poem is humorous for multiple reasons, including Baraka's ability to challenge polite sensibilities, which he does with the emphatic delivery of the last line as well as the critique of those who designate Presley as King. Yet, the poem is also funny because it's, well, funny. That is to say, the humor in the poem somehow defies student expectations of poetry.

Poets like Baraka, Reed, Hughes, Medina, and Young who chose to insert humor and joke-telling into their works were necessarily pushing themselves to practice ingenuity. "How do I defy audience expectations?," they may have asked themselves during the processes of composing humorous works.

So, poetry is a creative art form, and so too is telling good jokes.