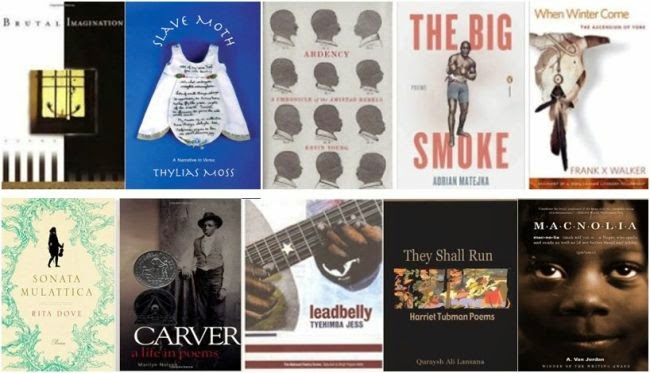 You've probably noticed several important trends concerning poetry produced by African Americans over the last 15 years. We've seen all those persona poems. We've noted the sonnets. There are other patterns out there as well.

And we also have what we might call "the novelization" of African American poetry. In particular, I'm referring to the rise of protagonists and often a supporting cast in volumes produced over the last several years. And where there are protagonists and a cast of characters, there are stories. You know, like novels.

Everywhere you look, you're likely to come across a notable or recurring character in books of poetry. For Cornelius Eady in Brutal Imagination (2001), it was the fictive black man that Susan Smith claimed kidnapped her children. For Tyehimba Jess in Leadbelly (2005), it was the legendary folk singer Huddie Ledbetter. For Quraysh A. Lansana in They Shall Run, it was the beloved Harriet Tubman.

Novelists have always been tasked with creating memorable characters. But for the most part, poets haven't always gone there, and it's likely that the majority of the poetry we encounter does not present full-fledged protagonists as we see in extended narratives. Yet, the poets that do take the novel-like route have stood out. They've stood out in part because their volumes have gained important recognitions, and thus helped shape the interests and attention of readers and other poets.

In the modern era, perhaps Rita Dove's Thomas and Beulah  (1986) and Elizabeth Alexander's The Venus Hottentot (1990) deserve special acknowledgement for raising the viability of prominent main characters. The successes of Dove's and Alexander's volumes suggested that it was worthwhile for poets to highlight the perspectives and experiences of distinct protagonists -- often well beyond the writer's individual personal experience.

In recent decades, as awards in poetry gained even more significance, then poets, or at least their publishers, have been more inclined to think of collections of poems as self-contained, packaged and promotable books. You know, like novels.

And of course, the awards are hardly the only incentive. It's likely true that poets were motivated to tell larger stories, which required full books, not merely a series of poems. Thus, Marilyn Nelson presents the life of George Washington Carver in her volume Carver (2001); Rita Dove treats the life of George Augustus Polgreen Bridgetower (1780–1860) in Sonata Mulattica (2009); and Frank X. Walker traces the experiences of York, an enslaved man who was part of the Lewis and Clark Expedition, in Buffalo Dance (2004) and the sequel When Winter Come (2008).

As you've likely noticed,  poets often select historical figures as their characters. Adrian Matejka, for instance, chose boxer Jack Johnson for the lead in The Big Smoke (2013), and A. Van Jordan, in his volume M-A-C-N-O-L-I-A (2004), presented MacNolia Cox, the first African American finalist in the National Spelling Bee. In Ardency (2011), Kevin Young presents the Amistad rebels, and in Slave Moth (2004), Thylias Moss offers the first-person perspective of a resourceful enslaved woman.

The prominence of contributors and the quantity of the volumes suggest that the novelization of poetry has become an important recurring practice among African American poets.
Posted by H. Rambsy at 8:49 AM