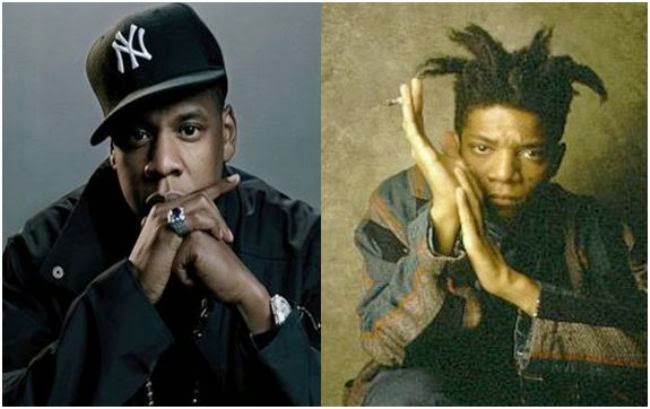 Back when Jay Z was promoting the release of his memoir Decoded(2010), he made the recurring point, which was also included throughout his book, that rap is poetry. The publicity surrounding Jay Z's comments, along with the release of Adam Bradley and Andrew DuBois's The Anthology of Rap (2010), further intensified the idea and debate of rappers as poets.  What is it about the notion of non-poets or non-conventional poets being presented as poets?

The other day, I was reading an article "The Unknown Notebooks of Jean-Michel Basquiat" by Luc Sante. The article mentions an upcoming exhibit at the Brooklyn Museum that will showcase Basquiat's writings. Sante points out that although Basquiat was widely known as a painter; he was also a writer: "he dealt in words, artfully executed with marker or spray can, to be sure, but nevertheless words intended to convey meaning, slantwise — that is to say, poetry."

That Basquiat was "already a poet is manifest in these notebooks," explains Sante. I don't doubt that Basquiat was a poet or that Jay Z is a poet. Yet, I sense that something else is also at work when we announce these and other figures as poets. The designation "poet" apparently confers a valued status beyond the field of rap or painting.

Sometimes when I hear "he's a poet too" or "she's a poet too," I wonder: which kind of poet? But maybe that's beside the point. It's the idea of poet that matters.

In a review-essay on Decoded, Kelefa Sanneh gave some push-back to the view of Jay Z as a poet. "Sure, he’s a poet," wrote Sanneh. "And, while we’re at it, a singer and percussionist, too. But why should any of these titles be more impressive than 'rapper'?"

That got me to thinking. What happens when we begin complimenting poets we like by noting that they also rap?

Related:
For more on the painter, see Artsy.net's Basquiat page, featuring his artwork.
Posted by H. Rambsy at 7:57 PM