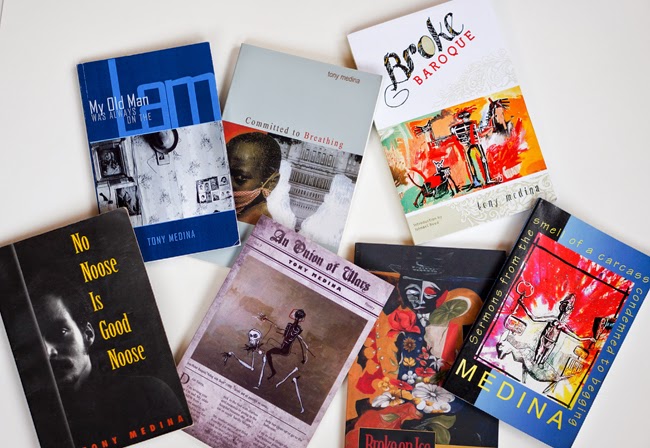 The volumes by Tony Medina that I own hold a special place in my poetry collection. Medina is one of the most prolific writers among the many poets whose books I have studied over the years. His work is inventive and powerful in all kinds of ways.

Medina is also an important connector between older generations of writers, including Paul Laurence Dunbar, Zora Neale Hurston, Langston Hughes, Amiri Baraka, and others. At the same time, he's a notable contemporary of writers like Adrian Matejka, Tyehimba Jess, Frank X. Walker, and Kevin Young. Further, his work links to a host of younger writers; check, for example, how Medina's anticipates this whole #BlackPoetsSpeakOut project.

I've been spending considerable time lately thinking about creativity among writers, and Medina's productivity and originality are useful for shaping my developing ideas. I've wondered if there are links between how much poets produce and the level of their creativity. Reading Medina's works over the last couple of months certainly reveals that he covers a wide range of subjects, and his prolific writing has in part helped make that possible.

That his books span considerable time is helpful for additional reasons. Tracing his career over several volumes allows me to see him moving in new directions and returning to familiar themes throughout his writing. Of course, it's both noble and admirable on his part and unfortunate for our society that police brutality has been an important subject, if not muse, for Medina.

Medina's concern for black well-being and his critiques of excessive and murderous force are really admirable. In his poetry on those subjects, he's clearly fighting the good fight. And who would've known that Medina's book title Committed to Breathing (2003) would resonate with today's haunting phrase "I can't breathe"?

Lately, I've been most interested in Medina's Broke series: Sermons from the Smell of a Carcass Condemned To Begging, Broke on Ice, and Broke Baroque. The poems are engaging, humorous, and bitingly satirical. I was laughing at his jokes throughout those three books, and also compelled to make quick turns to seriousness on Medina's social commentary about the struggles of someone living in poverty in this day and age.