The (Continuing) Rise of Ta-Nehisi Coates in 2014 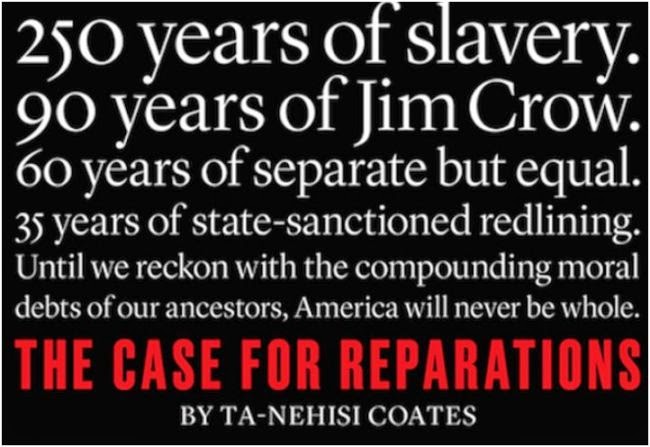 The most widely discussed and reviewed composition by a black writer this past year was Ta-Nehisi Coates's article "The Case for Reparations." In terms of reception, no other single-authored composition by  a black writer published in 2014 even came close. That's not to say that he is somehow more worthy  than other African American writers or that Coates is, as an article in the Observer once proclaimed, "the single best writer on the subject of race in the United States."

Instead, the extraordinarily high level of interest in Coates's article this past year reflects a combination of converging factors, including Coates's talents as a writer, the power of The Atlantic to present and promote a feature article about reparations, the ongoing popularity of treatments of race in American society, and the larger considerations about wealth disparities and inequality that reached new heights this year thanks to the conversations spurred by Thomas Piketty's book Capital in the Twenty-First Century (2014). Indeed, short,  "The Case for Reparations" appeared in the right place at the right time.

Scholars of African American literature might benefit by taking note of the continuing rise of a writer like Coates because of what the trajectory of his career signals concerning developments in what counts as valued black writings and writers in American culture. For the last two decades, the field of African American literary studies has devoted considerable attention to highlighting the significance of novelists, poets, playwrights, and short story writers. In the scholarly discourse on black writing, the designation "blogger" carries little weight.

Yet, Coates's identity as a blogger has greatly contributed to his development as a writer and to the broad recognition he receives. Like many of the country's most prominent bloggers, Coates began his career as a journalist, and later, blogging allowed him to expand his reach in ways that were simply not possible if he remained only a reporter or op-ed columnist. Hopefully, scholars of black literature will eventually expand the genres of writing we examine to include blogging.

Unlike many bloggers however, Coates possessed, through his employment at The Atlantic, a platform to produce long-form journalism--a mode of writing that often involves, if not requires, tremendous resources, including extended editorial, travel, and promotional support. As many commentators noted, Coates's article was more than 15,000 words and featured on the cover of the print magazine. The Atlantic produced a trailer for "The Case for Reparations" and accompanying, documentary-style videos for the online version of the article. In short, The Atlantic made significant investments in Coates and his article.

In an interview with BuzzFeed about "The Case for Reparations," Coates acknowledged that the "business people" at The Atlantic immediately sensed that the article was "gonna be big." They predicted that selling an article about race (and really anti-black racism) would generate substantial interest from advertisers, commentators, readers, and the general public. Their forecasts were correct. "The  Case for Reparations" was a success on many levels; as the magazine reported, Coates's article "set a single-day record for audience to a magazine story on TheAtlantic.com. Issues of that magazine have sold 60 percent more copies than its 2013 counterpart."

Coates and other commentators noted that the topic of reparations had been raised at various times throughout American history. Still, previous authors and books hardly received the level of attention that Coates did over the course of the last year. Why?

Perhaps those previous authors and works did not appear under a powerful imprint like The Atlantic. Maybe, the authors had not built and nurtured the kind of large, active following that Coates had prior to the publication of his reparations article. Previous articles had not appeared at a time when social media might serve to build buzz. And then too, it's possible that those earlier treatments of reparations could not tap into the conversations about wealth disparities that have been growing in intensity at least since the Occupy Movement.

Earlier this year, the English translation of Piketty's Capital in the Twenty-First Century and the ensuing conversations about the best-selling book further highlighted considerations of wealth gaps and inequality. The headline of a recent article in Slate seemed to capture the fanfare of the book by announcing that "Thomas Piketty Won 2014." Not coincidentally, many commentators who responded to and discussed the implications of economics and inequality central to Piketty's book also demonstrated interest in "The Case for Reparations." In retrospect, the atmosphere was just right for the expansive treatment of inequality that rests at the heart of Coates's article.

During the course of the year as Coates received attention in various media outlets, I noticed some folks expressing frustration that so many black writers, scholars, and organizers had been overlooked and never received the public interest that Coates did, even though those figures had previously addressed reparations. Even Coates was aware of such oversights and tried to acknowledge and highlight the routes and sources of his thinking on the subject. Still, some of what I was witnessing was part of a larger concern where black people rightly worried about the extents to which white people celebrate one black writer at a time.

I have been most acquainted with this "one-at-a-time" notion in relation to African American novelists and poets, and then later in the realm of politics with attention to Barack Obama greatly overshadowing large numbers of other African American politicians. Thus, it has been interesting following conversations about whether there's disproportionate attention to this one black writer Coates--a journalist/blogger.

I began following Coates's career as well as the careers of novelist Colson Whitehead and poet Kevin Young long before they became recognized as leading or prominent figures in their fields. What stands out to me about their careers is that in addition to receiving high levels of attention from commentators or reviewers, they were, before that, the beneficiaries of long-term and substantial early support. Therefore, some of the critiques about the over-attention that individual figures receive might in fact appear too late in the process, and such critiques often let publishing institutions off the hook for providing inadequate support for more black writers and perspectives over long periods of time.

Having said all of that, I'm curious about what Coates and other black writers will do moving forward, and I'm also interested in how publishing institutions facilitate what black writers will produce and how commentators and readers will respond to the writers' compositions in 2015.

Related:
• A Notebook on the work of Ta-Nehisi Coates
Posted by H. Rambsy at 9:21 AM