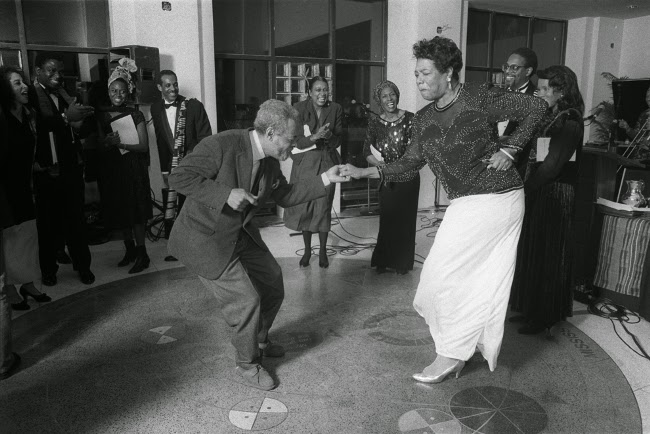 We might as well say, one more time, near the end of the year, that the loss of Amiri Baraka on January 9 and then Maya Angelou on May 28 were two tremendous losses for black poetry. We can comfort ourselves with the knowledge that they lived long, wonderful lives, and continually made all kinds of remarkable contributions. Not surprisingly then, we witnessed an abundance of remembrances for Baraka and for Angelou when they passed.

Poets are rarely mourned to the degrees that those two were. Certainly not black poets.

During the tributes and reflections, people rightly celebrated Baraka's and Angelou's extraordinary lives and careers. At some point, however, we might act a little selfishly and assess our losses. What, we could ask, are we now going to miss out on as a result of having lost Baraka and Angelou?

Thinking about what the loss of these two figures is not simply about wallowing in grief and self-pity. Instead, a consideration of what their loss means clarifies the significance of the presence of major black writers--who in this case became prominent cultural figures and not only writers.


Their prominence was definitely linked to their publications, but their longstanding, active public reading and speaking engagements were instrumental to what made them such relevant and organic forces in American and African American arts. Baraka became and remained a major public figure since the 1960s. His national, active reading and speaking schedule persisted for more than 50 years.

Or put another way, for the first time in half a century, major arts festivals, community events, and countless college campuses will not have the privilege or simply the option of featuring Amiri Baraka on their programs. That Baraka was moving audiences in his last years as much as he was moving audiences 10, 20, 30, and 40 years ago speaks to his amazing durability and talents. His long-time ability to inspire, provoke, stimulate, and challenge audiences based on a public reading also speaks to how essential his actual presence was.

Angelou too. Readers were never just content to have her books. They required having her in their "live."

Bill Clinton was not comfortable to merely read Angelou's work. He arranged to have her present at his inauguration. Oprah Winfrey was not satisfied just reading Angelou. The talk-show host sought the writer out and insisted that Angelou have a strong presence in Winfrey's life. The Bill Clinton Effect and Oprah Winfrey Effect greatly affected the course of Angelou's career and the value of her star-power. Without Angelou, we no longer have super celebrity so linked to an identity as a black poet.

Baraka and Angelou possessed a quality that seems increasingly rare among poets: cross-over appeal. Baraka, for instance, brought jazz fans to poetry and poetry enthusiasts to jazz in unprecedented ways. Angelou served as a gateway to poetry for thousands of people with little prior interest in the art form.

Among other problems, the loss of Baraka and Angelou unfortunately makes it easier for too many people to place poetry in only the poetry section. You couldn't do that with those two. You couldn't view poetry or a poetry reading in only conventional ways. No, Baraka and Angelou dealt too much in song, too much in the dramatic arts, too much into black folk history during their public presentations to allow you to define what they did as only a "reading."

I assume there are others out there who possess aspects of Baraka's and Angelou's performance talents. Those others just don't have the far-reaching, grassroots and scholarly popularity of a Baraka though. They don't have the star-power of Angelou. So we miss out. We have less public awareness that such figures and realms of knowledge exist.

Moving forward, here and elsewhere, I'll continue to mention aspects of Baraka's and Angelou's works. Like many others, I'll comment on their many contributions. But every once and a while, I'll take some time to note and acknowledge that their passing in 2014 constituted a tremendous loss for black poetry.
Posted by H. Rambsy at 8:08 AM