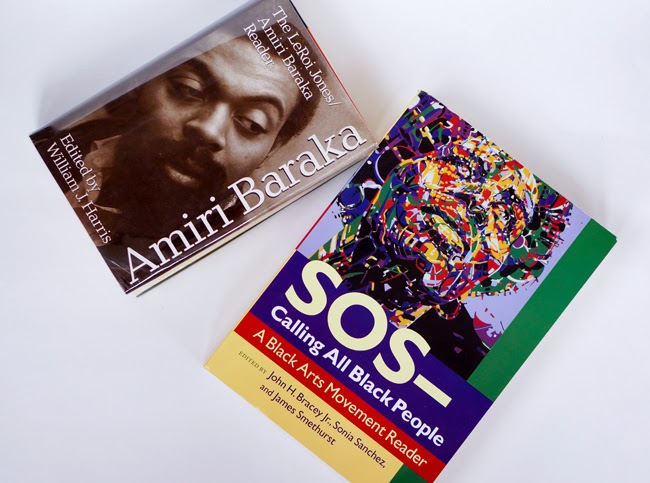 Amiri Baraka was no doubt one of the major movers and shakers of the Black Arts Movement; he was a notable architect, contributor, and subject of black arts discourse. And when  the movement supposedly ended in the mid-1970s, Baraka never received the memo. He persisted, remaining one of our most prolific and influential artists for nearly 40 years.

Not surprisingly, Baraka's presence and spirit loom large in SOS--Calling All Black People: A Black Arts Movement Reader (2014) edited by John H. Bracey Jr., Sonia Sanchez, and James Smethurst. The editors dedicate the anthology to the memory of Baraka (1934 - 2014), noting him as:

The title for the anthology is from Baraka's 1969 poem "SOS," where the poet reaches out "Calling black people /Calling all black people, man woman child." The anthology opens with that poem, and Baraka's 1994 essay "The Black Arts Movement" serves as one of the introductory pieces. The collection also includes Baraka's essay "The Changing Same (R&B and New Black Music);" his poems "Black People!" and "A Poem for Black Hearts;" and his play "A Black Mass."

Throughout the anthology, contributors reference Baraka's work and influence. They acknowledge his defining presence. They highlight his multi-genre productions and collaborations.

The Black Arts Movement did not have an individual leader. However, Baraka was an inspiring force for fellow writers and audiences. After all, the title and spirit of Baraka's poem "Black Art" functioned as a kind of basis or call for this idea and phrase "The Black Arts Movement." Baraka's charisma and popularity ensured that the movement would gain a much wider appeal than it would have without him.

Among other contributions, he was one of the more visible organizers and spokespersons for what artists were up to by directing their works and interests to black people, and linking their productions to militant activism and the vibrancy of jazz. And of course, Baraka was not alone. Many of his comrades in fact join him in SOS.


Related:
• A Notebook on SOS: A Black Arts Movement Reader
Posted by H. Rambsy at 7:37 AM