African American poets and the covers of Poetry Magazine

Hey, have you noticed the names of African American poets on several covers of Poetry magazine lately? Me too. That's great, hunh?

I mean, I know, I know, not enough people read poetry, and it's dying, and people keep fretting over whether it matters. Still, I was pleased to look back and notice the numbers of African American poets I've read or plan to read who've appeared on the cover of one of the most prominent periodicals in the field of poetry.

The appearance of fairly well-known poets on the covers solidifies and raises their visibility. The cover appearance is especially important for "new" poets. I was unaware of TJ Jarrett's work until I saw her name on the cover with Nathaniel Mackey's.  Now Jarrett is on my radar. My modest recommendation is that she should be on yours too (More on her work soon).

A cover for Poetry from back in the day -- the September 1959 issue to be exact -- carried the names of various poets, including one who had written "The Bean Eaters." Of course, it was the poem that readers discovered within that issue that became the poet's most famous one, a blessing and curse. 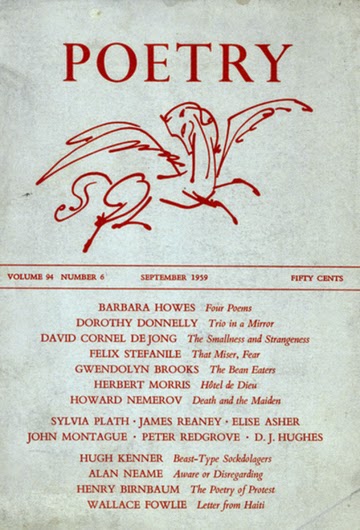 Related:
• Poetry &the Poetry Foundation Site
Posted by H. Rambsy at 9:58 AM