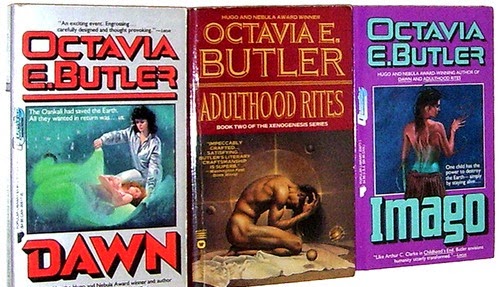 In studies of literary scholarship on Butler’s writings, the series covered most has been the Xenogenesis trilogy/Liliths Brood, including Dawn (1987), Adult Rites (1988), and Imago (1989), especially for Butler’s treatment on the effects of governmental gene manipulations on citizens and perpetual violence. However, Butler’s ability to create black women characters that are healers is noteworthy, in this case Lilith from Dawn.

Lilith does not have the healing capabilities that the women of The Patternist Series have; yet, her presence in the novel brings healing to Nikanji—an Oakali alien who served as Lilith’s teacher and protector—when he was nearly killed in a battle with the humans. And, as “first parent” Lilith raises an awareness of the importance of her position.

In a final battle, before the humans were genetically altered and sent back to earth, a human opponent severely wounded Nikanji and “its left sensory arm had been hacked almost off.” The sensory arm was used to mate when the Oakali were mature. In order to heal “it plugged into my [Lilith’s] left arm and penetrated her body with every head and body tentacle the could reach her.” After weeks of being plugged into Lilith’s body, “the infection seemed to heal….clear fluid continued to leak from the wound. Not until it stopped completely did Nikanji let her go.”

Nikanji’s body healed so quickly because Lilith had a family history of cancer. The organism that killed her mother and grandmother was “a gift” to the Oakali body. Nikanji remarks, “it has given me my life back.” Without her gift, “it would have not regained full use of the sensory arm. It could not have conceived children.”

Butler’s works present us with the opportunity to imagine the possibilities of witnessing healers that are genetically designed to heal the sick, both human and alien. Lilith also has several similarities as Keira, both are cancer survivors and they both adapt to the alien beings in their respective narratives.

Briana Whiteside is a graduate student  at the University of Alabama and a contributing writer for the Cultural Front.
Posted by H. Rambsy at 6:59 PM