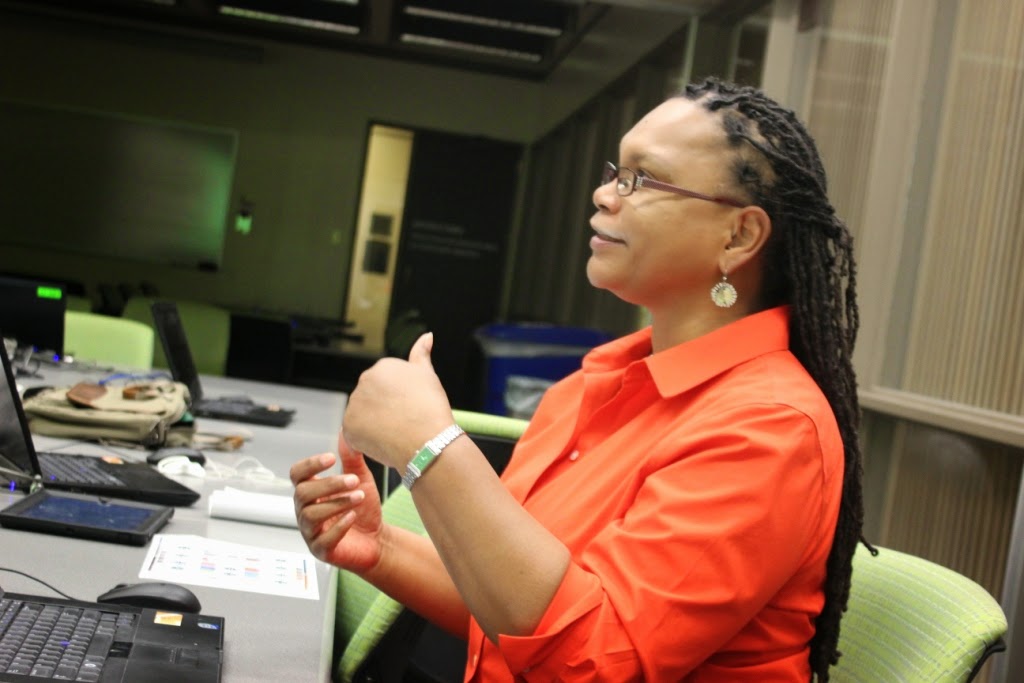 With little to no fanfare, Joycelyn Moody founded and has now directed the African American Literatures and Cultures Institute (AALCI) for 5 consecutive summers at the University of Texas at San Antonio (UTSA). The program involves rising college seniors in a general Black Studies curriculum, GRE preparation, and organization of graduate school application packages.

As the Sue E. Denman Distinguished Chair in American Literature at UTSA, Moody receives funding for research and scholarly projects. In addition to using the funds for research projects, Moody supports two major public projects: an annual African American Studies Symposium and the AALCI (or, as we call it, "the Institute").

Moody is the only distinguished professor in literary studies I am aware of who utilizes her university endowment resources to fund a summer institute for undergraduates with interrelated interests in African American Studies or black literary studies. The Institute represents a remarkable act of generosity and a serious investment on Moody's part. (I serve as the instructor for the AALCI).

I often refer to the Institute as Moody's quiet contribution because of how muted an endeavor like this one seems in comparison to the conventional activities in our fields. Typically, book publications, widely cited scholarly articles, keynote speeches, presentations on television programs, and profiles in major newspapers are how scholars in African American Studies and literary studies gain widespread notice. The rarity of a literary scholar creating and maintaining a summer institute for undergraduates makes Moody's efforts hardly audible.

But then, even whispers register for those who listen on the lower frequencies.

The Institute has now enrolled over 36 students (or "Fellows," as we call them) from 27 different universities. 15 of those schools are Predominantly White Institutions; 11 are Historically Black Colleges and Universities; and 1 is a Hispanic Serving Institution. What's notable, in my mind, about Moody's Institute is that it brings together a diverse group of undergraduates from multiple universities to converse, among other things, about black studies.

The routes of Moody's inspiration to found the Institute began several years ago when she encountered an essay by the late scholar Nellie McKay who highlighted "the problem of the pipeline." McKay noted that African American literary studies and by extension African American Studies in general struggled because of too little sustained effort in the academy overall to provide adequate, supportive training for new generations of scholars in the fields. The absence of more scholars of color or of more scholars doing substantial work on African Americans was linked to the channels through which such scholars might emerge. In other words, a problem with the pipeline.

For years, Moody shared the McKay article with colleagues and students. When she arrived at the University of Texas at San Antonio in 2007, she considered and pursued different options for projects. One of those projects, it turned out, was a planning meeting in 2009 to generate ideas about a summer program that might assist in addressing that problem of the pipeline. And in 2010, she welcomed the first cohort for the Institute.


As a college student, I participated in the UNCF/Mellon Program, which served as a useful foundation for my current work with the Institute. But millions of dollars separate the Mellon programs and the AALCI. Simply put, Moody ain't got Mellon money. Yet, she's proven that a rather modest budget can go a long way.

The AALCI Fellows receive a stipend, lodging, instructional courses, writing assistance, and an annual 5-day trip to New York City, which includes airfare and lodging. In retrospect, it was a mistake, in the past, for me to simply highlight how financial support Moody invested in the program. What is more notable is the ingenuity required to provide so much for so many students over the course of 5 years with the available resources.

What's she done is extraordinary. And since there's not enough communication in our field, I suppose I shouldn't be surprised that more folks haven't heard about Joycelyn Moody's quiet, astonishing contributions.
Related:
• A Notebook on the African American Literatures and Cultures Institute
Posted by H. Rambsy at 2:14 PM

A well-deserved shout-out to a real leader, someone whom the participants in this annual institute will recognize, I hope, as an rare exemplar.