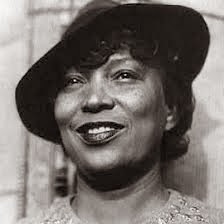 1925 stands out as a significant moment in the literary career of Zora Neale Hurston. In that year, Hurston’s short story “Spunk” was published in The New Negro: An Interpretation edited by Howard University Professor Alain Locke. The New Negro would go on to become the definitive text of the Harlem Renaissance and help to solidify Hurston’s reputation as a short story writer.

Hurston’s short stories appeared in over 50 anthologies after 1925. If you randomly select an anthology that contains Hurston’s work, you are probably going to encounter her short story “Sweat” (1926) or “The Gilded Six Bits” (1933). In fact, these two stories are anthologized so frequently that there are numerous online resources—including two in-depth entries on Wikipedia—to aid readers in better understanding the plots as well as major themes and motifs.

Another notable finding with Hurston pertains to the presentation of her work in anthologies. Hurston is presented both as a fiction writer and cultural critic with her essay “Characteristics of Negro Expression” (1934) or an excerpt from her autobiography Dust Tracks on a Road (1942) appearing alongside her short stories. In other words, unless it’s an anthology that contains only short fiction, Hurston’s short stories are usually paired alongside her work in other genres.

In an earlier post, I mentioned how “The Wife of His Youth” largely defines Charles Chesnutt’s reputation in anthologies despite his writing across multiple genres. Attention to Hurston’s presentation in anthologies, however, reveals that unlike Chesnutt, she is represented by more than just her short fiction. Perhaps, more attention to the presentation of short story writers across multiple anthologies will reveal the role editors play in deciding what selections will be made available to teachers and students.

Related:
• A notebook on short stories by black writers
Posted by H. Rambsy at 8:42 AM