The 'Almos' or 'Almost' of Richard Wright's short story 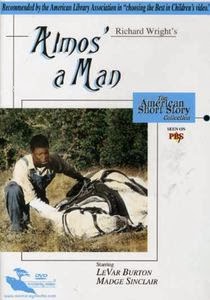 While the stories do not change, the two titles emphasize very distinct editorial decisions. One title highlights black vernacular. The other one highlights standard speech.

The title “Almos’ A Man” foreshadows the geographic setting of the short story by relying on African American Vernacular English and also underscores the importance of the South in black literary history. The “Almos’ a Man” title re-presents Southern speech patterns emphasizing the long “s” sound instead of the short “t” sound. The “t” is dropped from the word “Almost” and shortened to signal characteristics of black folk culture and emulate the drawl in speech that is common among black people in South.

The standard “The Man Who Was Almost a Man” title suggests that the story pertains more to a coming-of-age tale. Perhaps even the standard title helps to align Wright with other canonical white American writers who appear in American literature anthologies such as Mark Twain and William Faulkner who also deal with the coming of age male theme in their works. In other words, the standard title draws more attention to the similarities in theme instead of cultural differences.

The subtle differences in Wright’s short story titles indicate that his story is framed in different ways (highlighting Black Vernacular or Standard English) depending on the contexts.

Related:
• A notebook on short stories by black writers
Posted by H. Rambsy at 7:55 AM