Charles Chesnutt’s “The Wife of His Youth”: An Anthology Favorite 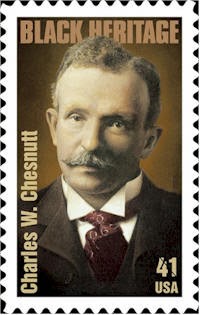 My exploration of African American short fiction begins in August 1887, when Charles Chesnutt’s first short story “The Goophered Grapevine” appeared in the Atlantic Monthly. Chesnutt would go on to publish two collections of short stories, The Conjure Woman (1899) and The Wife of His Youth and Other Stories of the Color-Line (1899). Even though Chesnutt wrote three novels during his lifetime, he is perhaps most remembered for his short stories.

His short fiction would go on to appear in over 100 anthologies since the release of his first story. Tracking the publication of short stories in anthologies, so far, reveals how Chesnutt’s stories are represented in a large number of African American and American literature anthologies. Although Chesnutt wrote numerous short stories, “The Wife of His Youth” has appeared by far the most.

The frequent reprinting of “The Wife of His Youth” in anthologies has solidified that story as the signature Chesnutt piece, at least among high school and college students who often gain access to American and African American literature through anthologies. Despite writers like Chesnutt producing a range of works, they often become known by a single work over time.

Related:
• A notebook on short stories by black writers
Posted by H. Rambsy at 7:24 AM