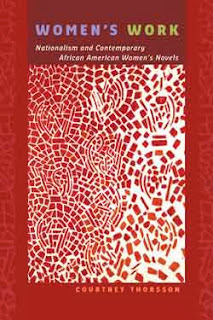 This year, I tried, well, I started trying to commit myself to getting much more writing done on my new major project on contemporary writers. Doing so meant I was deliberately cutting back on purchasing and reading new books, you know, so I could catch up on everything else. Ah, but then, I couldn't resist picking up Courtney Thorsson's Women's Work: Nationalism and Contemporary African American Women's Novels (2013).

Thorsson's book is about "the reclamation and revision of African American cultural nationalism as everyday and extraordinary women's work to fashion self and community" (178). She concentrates on works by Toni Cade Bambara, Gloria Naylor, Toni Morrison, Ntozake Shange, and Paule Marshall. In addition to providing useful interpretation gs of select works by those writers, Thorsson offers important literary histories of American, African American, and black women's writing.

Women's Work also recovers black cultural nationalism in contemporary scholarly discourse. These days, in the academy, it's rare to even hear discussions of cultural nationalism, but of course out here beyond the scholarly realms, we're surrounded by expressions of a black nationalist ethos. I mean, what is "Black Twitter" about? Or, why do the people view QueenBey and Olivia Pope or all those rappers and NBA players as so inspirational? Somewhere in all of that, cultural nationalism is at play, or at work, as Thorsson might say.

My first big project focused on 1960s and 1970s work, and now my next project is concentrating on 21st century writing, So I found Thorsson's work especially helpful for giving me a sense of the shape of things in black literature and literary studies between the mid-1970s through the 1990s.

Anyway, all of this is to say that Courtney Thorsson's Women's Work was one of the books I'm glad I came across in 2013.