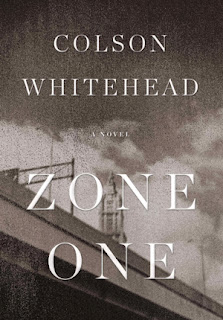 In Whitehead's novel, during a zombie (really a skel and straggler) apocalypse, that ol bad news Connecticut is identified as one of the most troubling places to be. Whitehead's novel is largely set in New York City, but the narrator of Zone One frequently reminds readers how bad, how truly awful, how utterly loathsome Connecticut is. At every mention of the state, an adjective is added to accentuate the terribleness of "The Constitution State."

What follows are the mentions of CT throughout Zone One:


The list doubles as evidence for why Whitehead's narrator will never, ever be considered for a Poet Laureate position in the state, except during a zombie apocalypse when those kinds of descriptive warnings would be useful for anyone even considering a trip to that accursed place.

By the way, before my students began reading the book, I informed them that they'd get a kick out of the state that Whitehead ridiculed. I didn't say the state, but told them they'd see while reading. One student was pleasantly surprised, she told me, to discover that it wasn't her home state, New Jersey that was the subject of the narrator's repulsion.

Related:
• Colson Whitehead
Posted by H. Rambsy at 8:35 AM