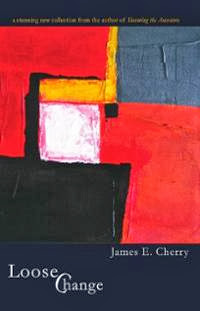 In 2005, I read James E. Cherry's Bending the Blues (2003), and I was pleased to add his work to my growing collection of contemporary poetry. A few years later, I read the manuscript and actually wrote a blurb for what would become his volume Honoring the Ancestors (2008). Now, I've just read his latest volume Loose Change (2013).

Cherry has been a productive writer over the years. In addition to those three volumes of poetry, he also published a novel Shadow of Light (2008) and a collection of short stories Still A Man and Other Stories (2011). Now that I think about it, his interests as a prose writer and storyteller were evident to me while reading Loose Change.

The volume, in fact, closes with a 10-part series, "Meditations in Middle Age." In one of those poems, he mentions reading obituaries in the daily newspaper where he recognizes the names of


elders who advised me,
playmates who were friend and foe
on athletic fields and young people whose names
should appear on high school diplomas
instead of the rolls of mortuaries

He admits that he has even developed a habit of searching "for my own name / between the Op Ed page and the sports section."

Cherry's skill at turning seemingly casual observations into some intriguing idea or a vivid image by the end  makes reading his poems especially rewarding. Like many of the poets that I've followed for several years, I'm inclined to go back and re-read past books at the moment I encounter a new one. So over the last month, I've been moving back and forth from Loose Change to Honoring the Ancestors to Bending the Blues and back again.

Related:
• Honoring the Ancestors
Posted by H. Rambsy at 6:51 PM