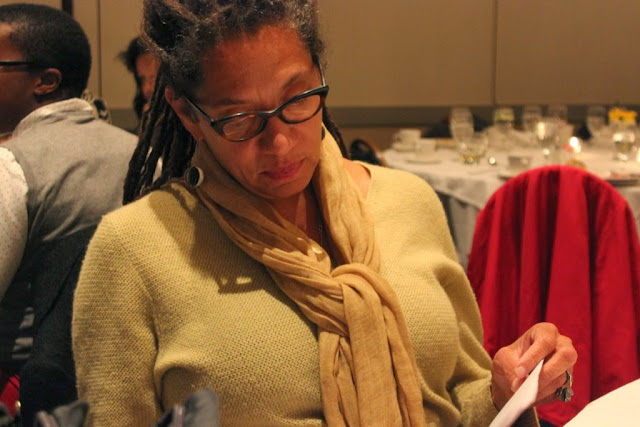 Friday, I presented a paper on “Black Women Poets by the Numbers 2000-2013,” at Celebrating African American Literature: U.S and Afro-Carribean Poetry” conference at Penn State. I enjoyed the experience—meeting distinguished poets and scholars, and learning about various research projects.

I was really moved by Nikky Finney's presentation of a poem. The poem was about LaVena Johnson, a young woman from Florissant, Missouri, who entered the U.S Army at the age of 18. Johnson's death in Iraq was initially labeled a suicide, but after advocacy from her parents and further investigation, it was discovered that she had in fact been raped and murdered. Her body was set on fire in an attempt by the perpetrator(s) to conceal the crime.

Finney's poem described aspects of the event. I was captivated by the intensity of her language and the elegance of Finney’s delivery. Hearing Finney read live gave me an appreciation for her work that I did not
previously have by reading her work on the page.

Her poem prompted awareness of the unjust, inhumane, sexist treatment that women may face who enlist in the U.S military. Finney's coverage of the injustice was delivered in a form of call and response. Finney made the call, and now, her audience is charged with the responsibility to respond.

Briana Whiteside is a graduate student in English at SIUE and a contributing writer for the Cultural Front.
Posted by H. Rambsy at 8:53 AM