Kamilah Aisha Moon's She Has a Name 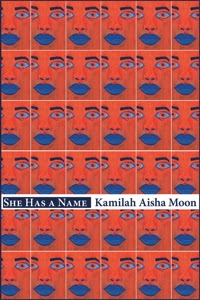 For years, I was aware of poems here and there by Kamilah Aisha Moon. Seems like I was seeing her name attached to poems in that anthology or this anthology, so I was somewhat surprised to see the label "debut" attached to write-ups about her volume She Has a Name (2013).  I assumed she already had a book.

Whatever the case, I'm pleased to have my hands on her book now, and I'm excited to add her volume to my growing collection. Her book extends that growing body of works in more than one way.

For one, her book contributes to the numbers of "first books" by poets that I've collected. I've been thinking about various poets such as Tara Betts, Jericho Brown, Camille T. Dungy, Adrian Matejka, and several others who produced their debut collections in the 21st century.

More importantly, I've been thinking about persona poems for a while now, and Moon's volume is the first one to offer an extensive treatment of a disability. Her volume focuses first-person perspectives of family members as they comment on living with a relative who has autism. So many of the volumes featuring persona poems that I have covered in the past have concentrated on historical figures like Frederick Douglass, the Venus Hottentot, Leadbelly, and others.

So Moon expands our line of vision. We hear from parents collectively who observe that "Our child's mind is on lease to her / from the stingiest of lenders" (8). We hear from the parents individually, the child's siblings, and teacher. Moon also presents poems as letters from her sister, and Moon also offers her own observations about challenges that her sister faces.

In future entries, I'll write about individual poems that caught my attention. For now, I was just thinking about these turns and how She Has a Name makes this important contribution to the larger body of works that I've been reading and how Moon's book gives us reminds us of the value of poetry to provide essential family histories.

Related:
A notebook on Kamilah Aisha Moon
Posted by H. Rambsy at 11:32 AM