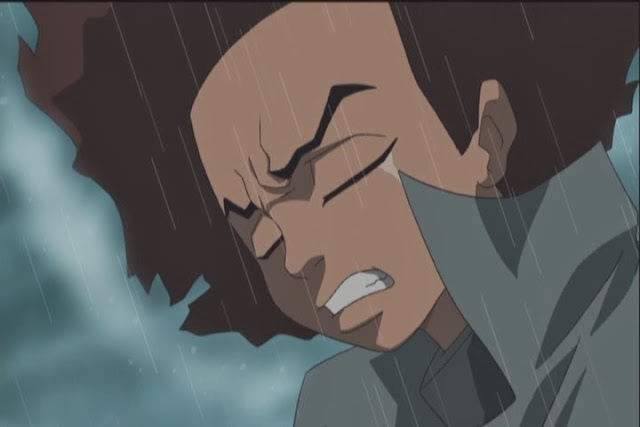 In the season one episode of The Boondocks entitled “The Passion of Reverend Ruckus,” Huey makes the statement “I never prayed before. I don't even know who I'm praying to. Maybe I'm too young to know what the world is supposed to be, but it's not supposed to be this. It can't be this.” This quote occurs in the context of the chaos that surrounded Uncle Ruckus deciding he wanted to start his own church. He (Ruckus) has a dream where he ascends to heaven and is instructed by Ronald Regan that the only way for him to get into heaven is to convince society to hate black people.

As Ruckus tries to convince others to believe this, Huey watches in disgust and turns away because he is simultaneously facing his own problems. He hopes to free his friend Shabazz K. Milton Berle who is on death row for a crime he didn’t commit. At the end of the episode Huey has exhausted all of his plans and they have failed and even though prayer is usually against his beliefs, he decides to pray to save Shabazz’s life.

The scene with Huey’s quotation about praying quote is exemplary of Huey’s high level intellect because it shows an advanced perception of religion and self awareness. At only ten years old, Huey shows a great level of persistence in not praying because he claims he doesn’t know who he’s praying to. He capitalizes on this persistence with an incredible level of self awareness. In matters of religion, most children do as they are told, or either just simply adopt whatever religious practices their parents have. Huey however and was intelligent enough to be able to form his own beliefs and follow his own practices.

With this quote, McGruder could be attesting to a number of things. The first and most obvious is the belief that he doesn’t know that there really is a God. Just the same, taking into account that just as Huey began to pray his prayer was answered, McGruder could also be hinting that prayer really does work. With Huey’s high level intellect, he also revealed that some things that happen could also be sheer coincidence. Having a ten year old be smart enough to make this statement is something that really stands out to us a viewers. With Huey’s intellect holding our attention, McGruder seemed to then make the point that religion can go either way, and that there are some things we just may never know.

Demetrius Coleman is an English major at SIUE and serving as a contributing writer for the Cultural Front this semester.
Posted by H. Rambsy at 1:41 PM