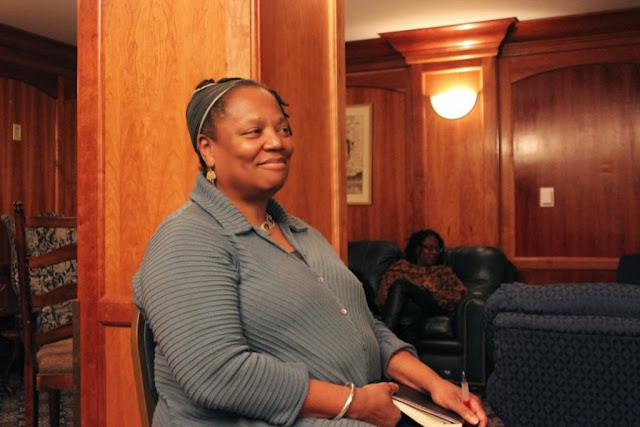 In addition to the useful content of the presentation, what was unusual and refreshing was how Hunt moved around and spoke. She would read a few lines from her paper and then move somewhere else. She would read quotations and offer dramatic pauses and wordless phrases (i.e. "hmph.") in response.

Her style of delivery was in itself some mixed media event.  But for me that wasn't even the highlight of the Erica Hunt Experience.

Later, I got a chance to sit with Hunt for lunch, and let me tell you: she's one of those spectacular critical cultural witnesses that I've been trying to think about for years.  We talked about poetry, recognition, nonrecognition, her high school activist days, her growing awareness of feminism, Katherine Dunham, East East St. Louis; and she recalled a "teach in" back in the day as a teenager when Nikki Giovanni and Haki Madhubuti gave a reading.

As I've noted often here, poetry is one of our most densely populated fields. That makes getting heard difficult, but on the other hand, poets with extensive careers like Hunt have had the opportunity to observe quite a bit and interact with dozens and dozens of poets and other artists over the years. She's taken note of multiple trends and artistic shifts. In short, Erica Hunt is a critical cultural witness.