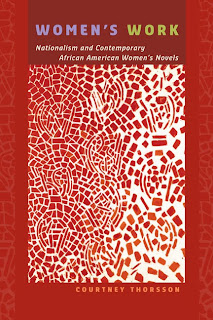 For the last two decades, Morrison has received the most scholarly discourse among the writers whose works Thorsson analyzes. In fact, in the scholarly discourse on African American literature, Morrison has received far more attention than nearly all writers. Thorsson expands the Morrison critical discourse, though, by highlighting her novel Paradise (1997), which tends to receive less attention than The Bluest Eye (1970), Sula (1973), Song of Solomon (1977), and Beloved (1987).

For readers less familiar with African American literature, works by Bambara, Shange, Marshall, and Naylor might be less known. Yet, those figures are essential writers in the realms of black women's writing. Early on, Thorsson notes that those writers "adopt the term cultural nationalist to describe themselves and nation to hail African America," and "this strand of African American fiction uses scenes of organizing, cooking dancing, mapping, and inscribing to create a distinct national discourse."

Given my previous interest in Bambara's work, I was especially excited to read Thorsson's chapter on Bambara's novel The Salt Eaters (1980). I'll write about that chapter in a later entry. I'm looking forward, though, to the other chapters on Shange, Marshall, and Naylor, whose works I've only read in small doses.

For now, the frame and early portions of the book have my mind running about the possibilities of expanding views of black cultural nationalism. Perhaps we might even think more about nationalisms.

Related:
• A Notebook on work by Courtney Thorsson
Posted by H. Rambsy at 8:36 AM