Scholar Jerry W. Ward, Jr. recently sent out a message requesting that those of interested in Richard Wright's work and legacy read 105 words by him before or on September 4, in observance of what would have been Wright's 105 birthday. Good idea. As I looked over my Wright books deciding on what to read, I of course came across my many editions of Wright's autobiography Black Boy also known as Black Boy (American Hunger).

For more than a decade now, I've collected editions and reprints of Black Boy, and I realized that the artwork and cover designs for the books present a range of visual ideas about the contents of Wright's narrative as well as the marketing approaches of publishers. What follows are some of the covers.

Album cover from 1970 and printings of the second part of the autobiography American Hunger from 1977. 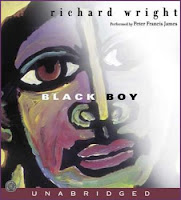 Cover from 2008, an edition from 2010 from an English publisher, and a "recent" old edition (date unknown for now).

Cover from 1971 edition, not sure on the additional two here.

Related:
• Notebook on Richard Wright
• The Mis-Education of the Negro [Book Covers]
• The Collected Works (Readers) of Black Scholars
• Collected & Selected Works of Black Women Poets
Posted by H. Rambsy at 10:23 AM